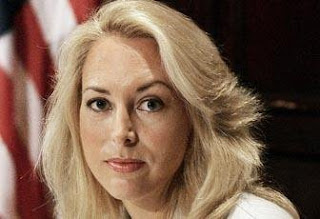 The traitors and war criminals who have taken over our government are dancing with joy this evening, and rightly so. Earlier today, a Federal Court of Appeals in Washington granted them legal immunity for every criminal action they have taken while in office.

The ruling, made by a panel of three judges in dismissing an appeal in the case of Valerie Plame [photo], absolves government officials of individual accountability for any actions taken in an official capacity, regardless of whether those actions violated federal law or jeopardized national security. In effect, it legalizes treason, war crimes, and crimes against humanity.

Ho hum. Andy Sullivan reported it this way for Reuters:

The Court of Appeals in Washington dealt another setback to the former spy, who has said her career was destroyed when officials blew her cover in 2003 to retaliate against her husband, Iraq war critic Joseph Wilson.

Plame's outing led [to] a lengthy criminal investigation, which resulted in the conviction of Cheney's top aide, Lewis "Scooter" Libby, for perjury and obstruction of justice.

But the court ruled that the named officials are not liable for their actions, as Sullivan continues:

[A] three-judge panel of the appeals court upheld a federal judge's ruling that dismissed the couple's lawsuit.

The court ruled Cheney and the others were acting within their official capacity when they revealed Plame's identity to reporters.

Government employees who engage in questionable acts, such as abusing prisoners at the Guantanamo Bay facility or engaging in defamatory speech, cannot be held individually liable if they are carrying out official duties, the court said.

"The conduct, then, was in the defendants' scope of employment regardless of whether it was unlawful or contrary to the national security of the United States," Appeals Court Chief Judge David Sentelle wrote in the opinion.

It is interesting -- and horrifying! -- to note that this decision ventures well beyond the "just following orders" defense which was used by the Nazi war criminals and found wanting at Nuremberg.

It even goes beyond the "divine right of government officials" long desired by the Dominionists of the allegedly "Christian" so-called "Right". At least under the proposed "Constitution Restoration Act", government officials would have to claim they believed they were carrying out the will of God in order to be absolved of their crimes. 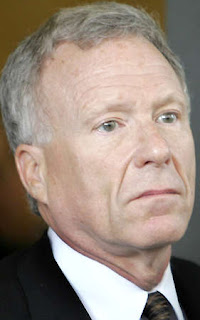 And -- let's be clear -- there is no question about whether crimes have been committed in this case. The Vice President's right-hand-man, Lewis "Scooter" Libby [photo], has already been convicted, and although his sentence was commuted, that doesn't make him any less guilty.

The crime in this case involved much more than outing Valerie Plame, an undercover national security professional, ruining her career and jeopardizing the lives of everyone who had ever worked with her. It was done at least in part to discredit her husband, Joe Wilson, who had publicly challenged one of the administration's most useful lies.

The lie was useful because it propelled the country along the road to war against Iraq -- a war waged on false pretenses that has already cost our country trillions of dollars and thousands of lives, not to mention all the other damages that are not so easily counted.

The falsely "justified" war has cost Iraq even more, of course; we've wrecked the infrastructure of a country that used to be home to 28 million people, and along the way we've killed more than a million of them and turned millions more into refugees.

It's a war of aggression, the ultimate crime against humanity, and it was all based on lies, including the tale about how Saddam Hussein had allegedly sought to obtain uranium from Niger -- a claim Joe Wilson investigated personally and found to be utterly baseless.

Proponents of truth and justice regard Joe Wilson's actions in this case as heroic: after all, he was taking a great personal risk in trying to defuse a dangerous situation by bringing to light a mistaken claim which was repeated endlessly by the administration.

But the claim wasn't exactly "mistaken". It was a deliberate, carefully crafted lie. And rather than allowing the truth of the matter to stand, the highest officials in our government chose to attack the truth-teller indirectly -- through his wife!

Exposing the identity of an undercover national security officer is -- according to federal law -- an act of treason. Telling deliberate lies in order to facilitate a war of aggression is -- according to international law -- a crime against humanity. These are the most serious crimes anyone can commit on the national and international stage respectively. All of this goes overlooked in the coverage provided by Reuters and others, who are -- as usual -- focusing on the narrow. 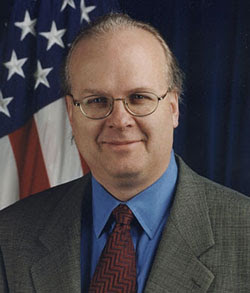 But even in the short and narrow version of this story, the course of action taken by our government officials has been despicable. To get back at a man who told the truth and tried to save many innocent lives, they attacked his wife! They couldn't confront Joe Wilson directly, of course, because he was telling the truth and they knew it.

So instead they outed his wife and damaged his family, and at the same time they also destroyed a precious national security asset -- an undercover professional, an expert on controlling the proliferation of nuclear weapons.

The Bush administration, under the tutelage of political operative Karl Rove [photo], perfected the tactic of using the specter of terrorists with nuclear weapons as a cattle prod. And in light of this, the outing of Valerie Plame alone reveals hypocrisy of the highest order.

But it's only one of many examples of rank hypocrisy in this case, and those examples are but drops in an ocean of hypocrisy, treason, and crimes against humanity that can be found (can't be missed!) in the horrific annals of this extraordinarily destructive administration. But Andy Sullivan and Reuters aren't saying anything about any of them. They're busy casting the decision as a "setback" to a "former spy".

Plame's lawyer says she will probably appeal. But surely the entire weight of the bipartisan criminal policy establishment will be aligned against any potential reversal of this decision.

And in the meantime, what about the rest of us? Because we weren't personally affected, because our careers weren't destroyed, we have no "legal standing" in this case, despite the fact that the ruling -- if upheld -- unleashes a most virulent form of tyranny, and despite the obvious fact that this is the ruling's primary intention.

You probably won't hear anyone criticizing this decision in the mainstream media -- and you might not read much about it elsewhere on the internet -- who knows? John Edwards had an affair, did you hear? Paris Hilton made a video! 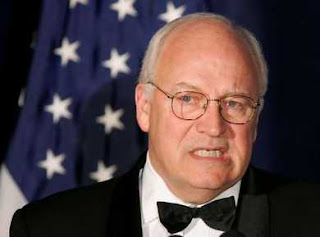 So let's recap, shall we? A Federal court has ruled that some of the highest officials in our government are not accountable for their acts of treason, mass murder, war crimes, and crimes against humanity -- not because they were following orders (for surely some of them, especially Karl Rove and Dick Cheney [photo], were giving the orders); not because they thought they were doing something righteous or Blessed by God; but simply because they held positions in the United States government -- regardless of the fact that these actions violated the most serious federal and international laws, regardless of the fact that they all knew their actions were deeply illegal, and regardless of the fact that they were never legitimately elected to those government positions in the first place -- or legitimately re-elected in the second place.

Furthermore, the court decrees, this immunity applies not only to the principals in this case but to all manner of American government officials committing all manner of horrific crimes -- including torturing prisoners at Guantanamo Bay.

Did you get that? Do you finally get it now?

The terrorists have won. The federal courts are now ruling that they are all beyond the law.

No doubt the perpetrators of 9/11 will be afforded the same immunity [* UPDATE: This prediction came true two days later]. Ho hum.

Just another "setback" for a "former spy".