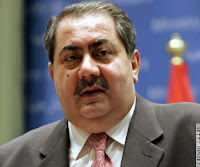 Whenever the pressure on Washington gets building you can count on puppets to appear overseas, so nobody could have been surprised to see Iraq's Foreign Minister warning against an American withdrawal from Iraq.

Iraq's foreign minister warned on Monday that a quick American military withdrawal from the country could lead to civil war and the collapse of the government, as pressure on the Bush administration for a pullout grows.
...

Iraqi Foreign Minister Hoshyar Zebari said Iraqis "understand the huge pressure that will increase more and more in the United States" ahead of the progress report by the U.S. ambassador and top commander in Iraq.

"We have held discussion with members of Congress and explained to them the dangers of a quick pull out (from Iraq) and leaving a security vacuum," Zebari said. "The dangers could be a civil war, dividing the country, regional wars and the collapse of the state.

This is good food for those with irony deficiencies: The puppet government installed in Iraq by the USA now lists the effects -- and the effective aims -- of the American occupation as reasons why the occupation must continue.

And considering that those who collaborate with the Americans, especially in joining the "security" services, are so often targets, the "until" in the following sentence represents a very long time indeed:

"In our estimations, until Iraqi forces are ready, there is a responsibility on the United States to stand with the (government) as the forces are being built," he said. Only slightly more astonishing -- though potentially dumbfounding to those who still buy the official GWOT fiction -- is a purported leader of al-Q'aeda threatening Iran over its alleged intervention in Iraq:

The leader of an al-Qaida umbrella group in Iraq warned Iran in a new audiotape released Sunday to stop supporting Shiites in Iraq, giving leaders in the neighboring country two months to severe ties or they would face a "severe war."

Abu Omar al-Baghdadi, who leads the Islamic State in Iraq, said his Sunni fighters have been preparing for four years to wage a battle against Shiite-dominated Iran.

"We are giving the Persians, and especially the rulers of Iran, a two month period to end all kinds of support for the Iraqi Shiite government and to stop direct and indirect intervention ... otherwise a severe war is waiting for you," he said in the 50-minute audiotape. The tape, which could not be independently verified, was posted on a Web site commonly used by insurgent groups.

Iraq's Shiite-led government is backed by the U.S. but closely allied to Iran. The United States accuses Iran of arming and financing Shiite militias in Iraq — charges Tehran denies.

In the recording, al-Baghdadi also gave Sunnis and Arab countries doing business in Iran or with Iranians a two-month deadline to cease their ties.

And so on. Bush couldn't ask for better allies than his supposed enemies. Funny how things always seems to work out that way for Mr. Trifecta, isn't it? 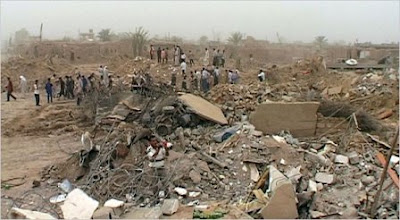 "We were wiped out mercilessly, and we blame the Americans, the Iraqi government, the criminals and all the politicians who brought us catastrophe and destruction. They have destroyed everything with their sectarianism and politics."

Chris Floyd quotes Zainulabideen Rustam Abdullah, who "lost his wife, three daughters, his grandson and his daughter-in-law" in last Saturday's attack, according to the Washington Post.

Abdullah's grandson was shredded into fragments of meat and bone because George W. Bush wanted to be a "war president" and prance around in his "Commander-in-Chief" socks.

Abdullah's wife had her brains dashed out because Dick Cheney wanted to impose American dominance over the oil lands of the Middle East, for the greater glory and profits for his oil cronies and his military servicing paymasters.

Abdullah's daughters were mutilated and disemboweled by shrapnel because the blind, monstrous engines of barbaric militarism and greasy war contracting have spread their moral rot from the wasteland called Hell's Bottom where the Pentagon was built throughout the entire American Republic.

Abdullah's daughter-in-law had her skin eaten away by ravenous fire because the leading lights of the American Establishment -- in government, in media, in business, in academia, in "think tanks" and "policy centers" – were giddy at the thought of empire, or dazzled by the prospect of loot, or maddened by ideological fervor, or driven by some private evil… or turned into cowards by 9/11, ready to sacrifice anything and everything – morality, reason, common sense, legality, the lives of their nation's soldiers and endless multitudes of innocent foreigners – in order to keep themselves safe, to keep living high on the hog, to stay well-wadded, cozy and comfy, forever protected from any adverse consequences of the destructive policies that have enriched them.

All too true. Leading lights "turned into cowards by 9/11" ... wasn't that the basic idea?