One Way Of Dealing With A Corrupt Politician 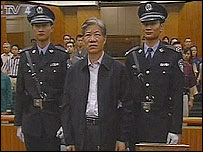 The former head of China’s food and drug watchdog was executed today, state media reported, following a sensational downfall that saw him become a symbol of the nation’s endemic graft.

Zheng Xiaoyu, 62, the former director of China’s State Food and Drug Administration that had a ministry-level ranking, was executed this morning following the approval of China’s Supreme People’s Court, Xinhua said.

Zheng was sentenced to death in late May after being found guilty of accepting 6.5 million yuan (850,000 dollars) in bribes in exchange for granting approvals for hundreds of medicines, some of which proved dangerous.

His execution comes ahead of the Communist Party’s five-yearly Congress expected to be held in or around October. The showpiece political event is typically preceded by official campaigns against corruption within party ranks.

Whoa! Ritual human sacrifice politics! How sensational can you get?

Political observers said previously that Zheng’s downfall had also marked a major step in reining in the country’s chaotic food and drug industries.

China’s consumer product quality-control systems have come under fierce scrutiny recently both at home and abroad due to a spate of incidents ranging from fake drugs to chemical-tainted food.

Zheng is believed to be the highest-ranking Chinese official put to death since 2000, when Cheng Kejie, the vice chairman of the National People’s Congress, was executed.
...

The report did not say how Zheng was executed but the typical method in China is a bullet to the head or lethal injection.

I haven't said a word!
File under: China, corruption, politics
Email ThisBlogThis!Share to TwitterShare to FacebookShare to Pinterest
Posted by Winter Patriot