Pakistani Opposition Leader: Make Peace With The Militants Or Face The Americans 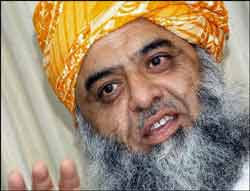 Americans may have been somewhat puzzled by last week's statements from Richard Boucher regarding the "necessity" of military action in Pakistan, since we've been told for the past six years that Pakistan is our number one Asian ally in the Global War On Terror. More likely they haven't heard anything at all about the most recent State Department-sanctioned saber-rattling.

So many of them may have been confused by the op/ed piece in Tuesday's New York Times by Daniel Benjamin and Steven Simon who say this is a war the Pentagon can't win, and that therefore the CIA should be given the job.

But you can bet people haven't missed the implications in Pakistan, where opposition leader Maulana Fazlur Rehman, speaking at a press conference in Quetta on Wednesday, called for a reinstatement of the peace deal in Northern Waziristan -- which militants declared 'ended' after the Pakistani military stormed the Lal Masjid (Red Mosque) complex.

The mosque has been restored and reopened [photo below], and Maulana Fazlur Rehman says the peace agreement should be restored as well, since it's a "hurdle in the way of American conspiracies", and if it breaks down, "America and other enemies would get a chance to intervene" in Pakistan.

"American conspiracies"! Can you imagine?? 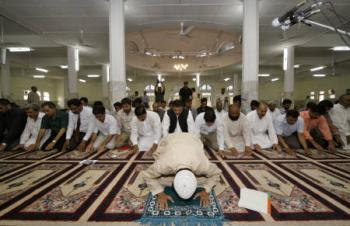