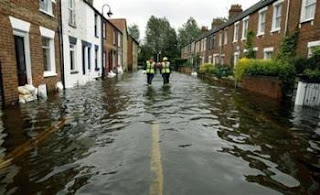 Bad news from England, and Reuters has the story:

The River Thames burst its banks on Wednesday, forcing the evacuation of hundreds of homes in the university city of Oxford in Britain's worst floods for 60 years.

About 350,000 people faced two weeks without running water and insurance companies said the bill could soar to 3 billion pounds ($6.2 billion).

Farmers say harvests have been badly hit and that farm animals in flood-hit areas could die unless water supplies are restored soon. 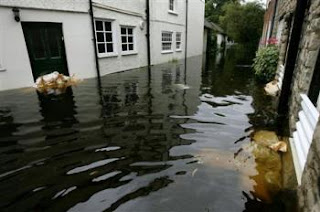 Oxford became the new frontline when rivers feeding into the Thames spilled over into its streets, forcing police to evacuate 250 homes. Aerial pictures showed flood waters not far from some of the city's historic college buildings.

Heavy rain is expected overnight and Environment Agency officials warned that the river had not yet peaked.

As the flooding spread along the river, officials said Queen Elizabeth's residence at Windsor Castle was not threatened and no property flooding was expected in London -- although heavy storms could always cause flash flooding.

"There are six severe flood warnings in place. It looks as if we are going to get up to 20 millimeters (0.8 inch) of rain across the board tomorrow," an Environment Agency spokesman said. 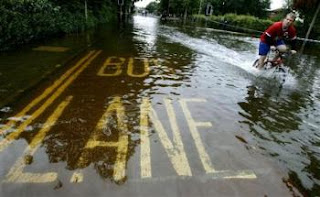 Milk shortages hit some areas with flooded roads making collections from dairy farms impossible. The rain brought harvesting of barley and rapeseed to a halt in many regions.

One power substation in Oxford was closed as a precaution, after it was partially flooded at the weekend, but customers have not been cut off because supplies were re-routed. Sandbags were piled up to protect other substations in the area.

Economists say the floods will trim back economic growth and are likely to trigger a short-term spike in food prices, but the overall economy is likely to weather the storm in the long run.

One beneficiary of the bad weather was the airline industry. British Airways said seat bookings for long flights were up as holidaymakers escaped the British summer.

"We need to invest more in preventing floods," Brown told parliament. Less than a month into the job as Britain's new premier, he said everything had to be looked at from infrastructure and drainage to where utilities were located.

In a stark reference to how 21st century weather had changed, finance minister Alistair Darling said: "Climate change is not a passing trend.

"It is a reality we must factor into everything we do. If we do not, threats to our everyday life -- like the floods this week -- risk becoming common." 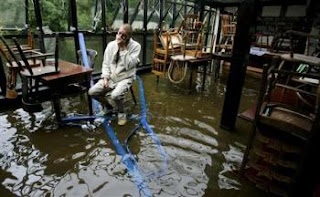 I usually try not to get too personal here, and maybe that makes it a bit impersonal sometimes ... but ...

We have a friend in Oxford and I certainly hope he and his family and their neighbors are all right ... but I suspect they're not.

Our friend writes often about the wanton and deliberate destruction of the infrastructure of Iraq; events such as this put it into a stark perspective which many Americans prefer to avoid. In my view, damage wrought by nature is horrifying enough, especially if the natural forces are exacerbated by human abuse. Whether humanity actually contributes to climate changes and natural disasters is still in dispute -- amazingly, in my view. (Even more amazingly, to me: among those who write about false flag terror even more than I do, many of the most influential -- Alex Jones, Mike Rivero, and Kurt Nimmo, to name just three -- disagree with me about this.)

But there can be no dispute about whether humans have caused the destruction of Iraq, which is so much worse than these heartbreaking photos from Oxford (thanks to Reuters) ...

Earlier today the multi-ethnic Iraqi national soccer team beat South Korea in a dramatic shootout and qualified for the final of the Asia Cup -- after which suicide bombers attacked the dancing crowds in the streets of Baghdad, killing at least 50.

But we didn't see the dead and wounded in the streets. We never do.

All we see are the crazies, celebrating with their flags and their AK-47s. 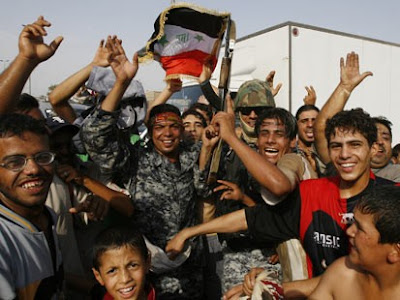 So here's my question:

If photo essays on the devastation of Iraq covered the front pages of every major daily, every day, how much longer do you think the war would go on?

The flooding in Pakistan is far far worse, and as usual this has been ignored or at least under-reported in the West.

From the Pakistan Times: 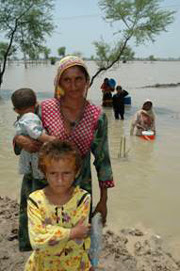 KARACHI: Six more villages have submerged due to increase in water level in tehsil Juhi of district Dadu while the land communication of Jhal Magsi and Ganda Wah could not be restored even after one month.

An engineer of the Irrigation Department, Habib Alal Kabro said that the 30-feet breach in tehsil Khairpur Nathan Shah has been repaired by the staff of the department within two days. However, five villages -- Goth Qanb, Goth Allan Laghari, Goth Haji Khan Babbar, Goth Gharo and Shahi Laghari -- are still underwater due to this breach.
...

Chief Minister Balochistan Jam Mohammad Yousuf has declared the province a calamity-hit area and announced to waive the provincial taxes due to heavy damages caused by rains and flood in Balochistan.
...

Chief Minister Jam Mohammad Yousuf said that he demanded from President Pervez Musharraf to direct the federal government also to waive its taxes for all over Balochistan.

The chief minister Balochistan appealed to all friend countries for providing aid to the flood-affected people of the province.