Who Would Attack A Children's Hospital? 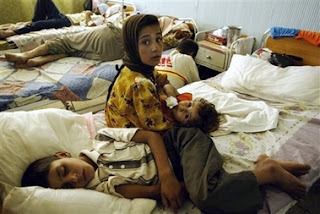 AT least 24 people were killed and 66 wounded when a suicide car bomb exploded across the street from a children's hospital in the Iraq city of Hilla today.

"Most of the wounded were women and children, and the blast destroyed 15 vehicles and about 20 nearby shops," said Lieutenant Eid al-Shammari of the local police.
...

I wouldn't have such hunches except that the perpetrators of this sort of attack have been so blunt in stating their intentions.

So it wouldn't come as a big surprise if the area were crawling with Americans, nor will it be a big shock if the attack is blamed on al-Q'aeda.
File under: Iraq
Email ThisBlogThis!Share to TwitterShare to FacebookShare to Pinterest
Posted by Winter Patriot