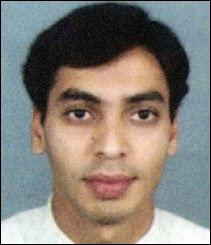 Suppose while living and working in a foreign country, you were arrested on "terror" charges that turned out to be groundless.

Suppose while you were detained, your work visa was revoked.

Suppose the "case" against you collapsed quickly and you were released.

What would you do?

[1] Go back to your native country, see your wife and the rest of your family, find another job, and resume your life as quickly as possible ...

[2] Stay in the country where you had been arrested even though you couldn't work there ... or ...

[3] Wait a while and see what happens.

Be careful! One of the above may raise suspicions!

An Indian doctor detained in Australia over failed car bombings in Britain has only raised suspicions by heading home so soon after being cleared, Immigration Minister Kevin Andrews said Sunday.

Gold Coast doctor Mohamed Haneef spent more than three weeks in detention on one count of "reckless" support for a terrorist group, but the case against him collapsed Friday for lack of evidence, and the charge was dropped.

Haneef quickly arranged a flight out of Brisbane, and was due in the southern Indian city of Bangalore at 9:30 pm (1600 GMT), where he was to reunite with his wife and meet his one-month-old daughter for the first time.

"If anything, that actually heightens rather than lessens my suspicion," he told commercial television.

What would they be saying if he hadn't left?

Well you know his family is overseas, and he has no job here, and he can't get a job here, so why is he hanging around? Do you not find that suspicious? Do you think he might be planning something?

You heard it here first: These guys are absolutely shameless.

My Australian friend Gandhi has been blogging the Haneef story at Howard Out.

Click here for all the details.
File under: Gandhi, Mohamed Haneef
Email ThisBlogThis!Share to TwitterShare to FacebookShare to Pinterest
Posted by Winter Patriot