The Counter-Debate: McKinney and Nader on Democracy Now! 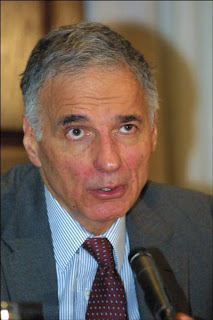 Amy Goodman of Democracy Now! hosted a session in which "third-party" presidential candidates Cynthia McKinney and Ralph Nader were invited to respond to some of what went on in last night's puke-a-thon.

I decry the policies of both Republicans and Democrats but I do not support those who say you shouldn't vote. Personally I'd be happy to vote for either Nader or McKinney.

Here's a sample of their comments, beginning with Ralph Nader on Iraq and Afghanistan:

the big-time terrorists, George W. Bush, Dick Cheney, these are clinically verifiable mass terrorists who have killed innocent civilians in Iraq and Afghanistan and elsewhere in their criminal wars of aggression. These are criminal wars of aggression. These are war crimes. These are war criminals. They have killed over a million Iraqi civilians as a result of that criminal invasion. That’s where the discussion should have focused on. The big-time terrorists, the state terrorists in the White House who have violated our Constitution, our statutes and our international treaties, and have been condemned even by the American Bar Association for a continual violence of our—violation of our Constitution.

In 2000, when people went to the polls, when the voters went to the polls, they were met with confusing ballots, manipulation of the voter lists, electronic voting machines that didn’t work, inappropriately or ineffectively or poorly trained officials who weren’t familiar with the workings of those machines, and we know what the problems with those machines have been and are. We still have those problems that have been with us since 2000.

In 2004, they added to these problems with the electronic poll books, the sleepovers that were discovered, where the machines weren’t even secured, even intensifying the failures of the machines with the vote flipping, and usually in only one direction. The battery freezes in the midst of voters actually trying to cast their votes.

So, now, what kind of election is it when neither of the political parties is addressing the issue, the fundamental issue, of whether or not our votes are even going to be counted? 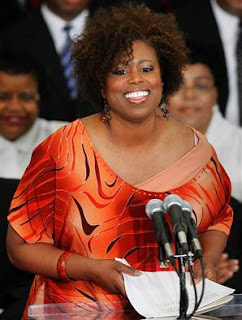 McKinney again, on the issues that matter most to her:

the issues that I’ve been talking about as I’ve gone around this country have been the tremendous impact that the Bush tax cuts have had on income inequality in our country. The sad fact of the matter is that we are experiencing the kind of income inequality not experienced since the Great Depression.

In addition to that, I’ve been talking about the need to repeal the PATRIOT Acts, so that we can safeguard our civil liberties, protect the Constitution and the Bill of Rights.

It’s interesting that, categorically, I support single-payer, and I believe that Ralph Nader does, as well. We make no bones about our support for a single-payer healthcare system in this country. And just last week, 5,000 physicians wrote a letter, and they said that it was the only morally responsible, as well as fiscally responsible solution to the healthcare problems that face our country.

Nader on the economic situation:

above all, we need to make the speculators pay for their own bailout. And that can be done by a one-tenth of one percent tax on derivatives transactions, which this year will be $500 trillion worth. So, one-tenth of one percent will produce $500 billion; two-tenths of one percent will produce a trillion dollars. And that is only fair. So, what’s important here is there’s nothing spectacularly new about a derivatives tax. The stock tax transaction helped to fund the Civil War. Franklin Delano Roosevelt used it. Some European countries have it now. People in New York and elsewhere go into a store and pay six, seven percent sales tax for necessities of life. But someone today on Wall Street will buy $100 million of Exxon derivatives and pay nothing.

It's no wonder you don't see these candidates in the "serious" debates.

They make too much sense!