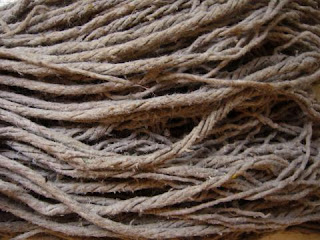 I haven't been able to blog as much or as often as I would have liked lately, and I've been forced to neglect many of the stories that I'd been following, some of which continue to develop. I can't write a full post about each of these stories, but I don't want to forget them altogether, so here they are: a collection of ragged threads and loose ends that have been in danger of being cut off ...

Derrick Shareef has been sentenced to 35 years in prison after trading a pair of car stereo speakers for a box which he was told contained four grenades, a handgun and some ammunition. According to the official account, Shareef was planning to attack CherryVale Mall in Rockford, Illinois, in December of 2006. In reality, the mastermind behind the plot to bomb the mall was Jameel Chrisman, an informant sent to Rockford by the FBI to entrap Shareef, who they hoped would lead his friend, Hassan Abujihaad, to incriminate himself.

The entrapment of Shareef was part of an effort by the FBI to bolster their case against Abujihaad, a former US Navy signalman who allegedly passed secret information to a terrorist website while he was serving aboard the USS Benfold. The prosecution admitted there was no forensic footprint connecting him to the information they found when Babar Ahmad was arrested in England. Abujihaad, who despite the lack of evidence was convicted of supporting terrorism, has requested a new trial, on the grounds that no actual evidence was presented against him.

Amateur rocket-fuel experimenter Ronald Swerlein has been sentenced to 6 years probation and 200 hours of community service for making and detonating explosive compounds, in his Longmont, Colorado, home. He's also been billed $30,000 by the Longmont Police Department for the expenses the police incurred in firing seven cannisters of tear gas into his his living room, rather than knocking on the door and asking him to step outside; plus the four days they spent cataloging and taking away his his chemistry set, his library, his firearms and so on.

In Canada, a guilty verdict has been handed down against a teenager whose name cannot be published (because he's under-age), who was charged under the country's "strong" new anti-terrorism law. How strong? As Toronto's Globe and Mail reported:

Despite the fact there was no evidence that he planned, or even knew about, any specific plot, he was found guilty of participating in a terrorist group.

We discussed this case back in June when the chief witness for the prosecution admitted that the young man who was found guilty was unaware of any plot to commit acts of terrorism, that he merely went along on a camping trip with the others, who were so secretive that they spent part of their weekend eating donuts in the parking lot of a popular store.
The International Herald Tribune notes:

Despite the guilty verdict, the man, now 20 years old, has not yet been formally convicted. His conviction cannot be entered until the court reviews an abuse-of-process application from his lawyer contending that many of the group's activities were made possible by a paid police informant who, the lawyer says, committed illegal acts himself.

There's more on the story here, at the Galloping Beaver (and here too) and here, at Creekside (and thanks to McJ.)

I made an error of omission (which has been corrected) in yesterday's post, "A Formula For Endless War: The Wounded Shark, The Quest For Victory, And The Illusion Of Success", when I wrote about

a common thread running through all our wars: every piece of equipment ruined must be replaced. Every bomb used, every bullet fired, every meal eaten must be supplied by somebody who is making money on the deal.

I failed to mention, of course, the intimidation factor.

Every other country in the world must measure each action, plan, or strategic idea according to a number of factors, including whether they think the Americans will stand for it.

The bombing, invasion, destruction and subsequent occupation of Iraq -- based on no credible evidence to support any of the claims which supposedly made this course of action necessary, says to every other nation on the planet:

As Jonah Goldberg explained in National Review in 2002:

I've long been an admirer of, if not a full-fledged subscriber to, what I call the "Ledeen Doctrine." I'm not sure my friend Michael Ledeen will thank me for ascribing authorship to him and he may have only been semi-serious when he crafted it, but here is the bedrock tenet of the Ledeen Doctrine in more or less his own words: "Every ten years or so, the United States needs to pick up some small crappy little country and throw it against the wall, just to show the world we mean business." That's at least how I remember Michael phrasing it at a speech at the American Enterprise Institute about a decade ago (Ledeen is one of the most entertaining public speakers I've ever heard, by the way).

Yep. He's entertaining as all hell, for some people.

And this may be God's way of preparing them for the journey.