Desperate Measures For Desperate Times: McCain Panders To Bush's Base 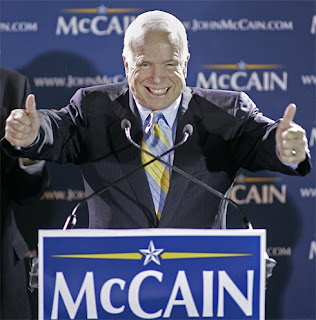 Derrick Jackson of the Boston Globe gets it almost right in his editorial, "McCain's blatant pitch to the rich":

JOHN MCCAIN went to New Hampshire this week at a time when voters understand the limits of their state motto "Live Free or Die." They know the economy is dying on fat cats living far too free. Barack Obama leads in state polls by 7-to-13 percentage points.

Undaunted, McCain played the greed card. "Barack Obama wants to, quote, 'spread the wealth around,' " McCain said, with fingers in quotation marks as the audience booed at St. Anselm College in a speech shown on television. "We don't need government 'spreading the wealth. . .' " he said. McCain uttered variations of spreading the wealth 12 times.

He was cheered when he said, "The redistribution of wealth is the last thing America needs right now."

The problem for McCain, Palin, and the Republicans is that the majority of Americans beg to differ. Redistribution in some form is the first thing people want after two decades of runaway pay disparity between CEOs and workers, tax loopholes so wide that two-thirds of American corporations paid no income tax from 1998 to 2005, and the banking system now getting $700 billion from us to bail out its incompetence. All this while healthcare, gasoline, and college tuitions gobble up any raises regular folks get.

... and what they do shows quite clearly that they are our enemies.

These developments are so identified with the Republicans that every tactic McCain uses to escape them ends up with him making a mockery out of the party's claims to values. McCain's Ohio mascot Joe the Plumber turns out to be Joe the Unlicensed Plumber who owes back taxes. Palin is the self-proclaimed pit bull with lipstick, but the Republican National Committee was so freaked that the shtick was that of a hick that they Barbied her up at Nieman Marcus and Saks Fifth Avenue for $150,000. Talk about spreading wealth around. Not many hockey moms or wives of Joe the Plumber can drop three times the national median household income to look civilized.

Meanwhile, a CNN poll this week shows Obama leading McCain on the question of who would better help the middle class, 60 percent to 36 percent. A Washington Post/ABC News poll has the same question as 59 percent to 31 percent Obama. Obama has pulled away from a virtual tie with McCain on who would better handle taxes, into double-digit leads in some national polls. On who best will handle either the economy or the current fiscal crisis, Obama is beating McCain roughly 53 percent to 39 percent.

Only a miracle can save McCain's campaign now, but miracles are always available. How about a little terrorism?

As Derrick Jackson points out, when

McCain rails against spreading the wealth in America, he runs right back to the man he says he is running away from, President Bush. In 2000, Bush the candidate greeted the well-connected audience at the Alfred E. Smith political roast in New York by acknowledging them as the top 1 percent. "This is an impressive crowd, the haves and the have mores," Bush said. "Some people call you the elite. I call you my base."

McCain is too late to turn that joke into serious political strategy.

It wasn't a joke; it is a "serious political strategy", and it has carried the day in America for most of the past 30 years. But it might not be enough to compensate for the other shortcomings that are clearly visible in the Palin/McCain ticket, and in their campaign:

A recent survey by the American Affluence Research Center in Atlanta found the nation's wealthiest 10 percent to be tied at 48 percent each for McCain and Obama. What once was a campaign of a senator who reached across the aisle on campaign financing and global warming is now stoking selfishness into the silly zone.

Well, it would be silly except for the implications. If McCain is telling America's rich that their gains are utterly decoupled from the wealth disparities of fellow Americans, what does that foretell about foreign policy in his administration? The rest of the world has already told us. The Pew Global Attitudes Project found vastly more confidence in Obama than McCain.

That's a very generous way to phrase it. The rest of the world is much more scared of McCain than they are of Obama. But that doesn't mean they have any confidence in the Democrat. Those of us who have been paying attention have no confidence in him at all.

This is, of course, no concern to a campaign whose slogan is "America First." It is rapidly sounding like "Me First." How patriotic. That is too much even for the limited-tax Live Free or Die state.

Wanna talk about patriotic? How about this? (This, too!) Their lying knows no bounds; and it doesn't have to, because they're Republicans.

And to a certain extent -- sadly -- the Democrats have stopped telling the truth about the Republicans. But the Republicans have held fast to their long-established strategy. And it has worked for them. But I digress. The more important point here concerns redistribution of wealth.)

All systems of government redistribute wealth. It's inevitable. Every piece of legislation pertaining to tax law -- or any other aspect of the economy -- steals money from somebody and gives it to somebody else. What matters is the direction in which the money flows.

Some governments steal from the poor to give to the rich. Some do the opposite. In America, the government has been doing the opposite for a long time now. But in our mutant national politics, that's not called "redistribution of wealth"; it's not called anything at all.

It's never even mentioned, except in cliches and with approval. "Money makes money", the supposedly wise men say, and we, the thick-headed paupers, are all supposed to smile and nod -- as if it were perfectly acceptable for all the wealth of a wealthy society to flow to those who don't need it at all.

We're supposed to think it's right and proper, healthy and sane, for our government -- elected by our votes, and spending our money -- to assist that process. But it isn't, and we don't.

If John McCain thinks that appealing to the ultra-wealthy is his only chance, he's right.

With the failure of the Republican party to nominate a candidate who can even pretend to be level-headed, it's going to take a massive hack to deliver the proper result in this election. The inevitable backlash will be dealt with -- but the wealthy have to be onside. And McCain is doing his insane best to make sure they are.

My wife asked me the other day if I thought the weekend after the election would be a good time to travel. I said I didn't think so.