Obama Gaining Strength Where It Counts 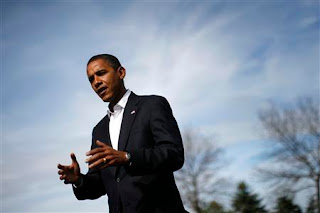 Support for Barack Obama has been rising among two segments of the American electorate whose support the Republicans usually count on: the rich and the filthy rich.

Reuters reports on a close race between the two candidates, even at the highest levels of the American kleptocracy:

Jim Taylor, vice chairman of the Harrison Group, a market research and strategy firm in Waterbury, Conn ... who produces a quarterly "Survey of Affluence and Wealth in America," said the wealthy were once a solid Republican majority. "It's not anymore," he told the Reuters Wealth Management Summit on Tuesday, citing the findings of his latest survey of 614 affluent individuals taken September 19-23.

That showed McCain had 40 percent of the "affluent and wealth vote," compared with 33 percent for Obama, and given the recent stock market slide Taylor says he would be surprised if Obama's support hadn't risen further in the past few weeks.

In the 2000 and 2004 presidential elections, in contrast, about 80 percent of the wealthy supported the Republican nominee, Taylor said.

The Republican nominee happened to be George Bush, but people who support Republicans -- the people who did the most to put him in a position of power -- avoid mentioning his name whenever possible these days. Big surprise.

The collapse of Republican support is even more dramatic among the filthy rich:

For the wealthiest American households, who have at least $1.6 million set aside each year for discretionary spending, McCain was favored over Obama by 49 percent to 28 percent.

"That may sound like a lot but but there was a time when it was 100 to zero percent," Taylor said.

That may sound like a lot? Actually, what sounds like a lot is $1.6 million discretionary spending, minimum, per household.

Even among the most ambitious discretionary spenders, the notion that a Palin-McCain administration would hold the line on taxes and thus provide greater prosperity is not flying particularly well these days:

"Everybody believes that taxes are going up ... no matter who gets elected," said Timothy Vaill, chairman and chief executive of the wealth management arm of Boston Private Financial Holdings, a money-management firm.

So now it boils down to other things, Obama is looking more appealing all the time, especially abroad:

"The non-U.S. wealth-holders I've talked to, in India for example, were feeling very negative on Obama. And all of sudden the Palin thing has flipped that because as naive as Obama looked they think Palin looks more so," he said.

He said wealthy individuals in India are highly critical of Obama's willingness to strike against terrorists in Pakistan without approval from Islamabad.

"They would say 'oh, Obama is terrible.' I just kept running into that when I was there. But when McCain chose Palin, they said 'oh Palin.' They just don't understand the whole culture around her, the 'hockey mom' idea."

Reuters won't mention it, but Obama's status among the well-to-do is certainly not damaged in any way by the fact that he owes his soul to Wall Street.