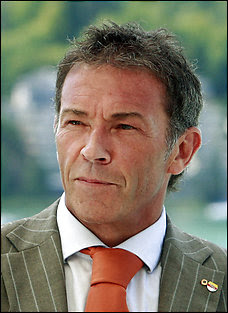 [Update: Apparently I am in the minority ... of something or other! You can read some differing views here, courtesy of Kenny's Sideshow (an excellent blog, BTW, other than a habit of linking to me!) ... and there's more here at Winter Patriot dot com, courtesy of McJ. ]

The right-wing Austrian politician Jorg Haider has been killed in a car crash. Too bad.

Even though Haider was a Nazi sympathizer who was popular for his racist policies, his obituary (written by Matt Schudel) in the Washington Post tries hard to portray him as a respectable and successful figure, even while mentioning a few of his career low-lights. This tells you everything you need to know about the Washington Post.

Jörg Haider, a divisive Austrian political figure who rose to prominence as the leader of a far-right movement that was often seen as sympathetic to the country's shadowy Nazi past, died Oct. 11 in a car accident near the southern Austrian city of Klagenfurt. He was 58.

Mr. Haider was passing another car when his Volkswagen Phaeton left the road, struck a pillar and overturned. He died on the way to a hospital. There was no immediate suspicion of foul play.

The charismatic Mr. Haider single-handedly made the ultra-conservative Austrian Freedom Party a force in national politics with his fiery rhetoric against immigrants, the European Union and the euro, the EU's continent-wide currency. He led the most successful far-right party in Europe, far outpacing the political success of France's National Front.

Handsome, photogenic and perpetually tanned, Mr. Haider was known to his supporters as the "Alpine Rambo," partly for his prowess as a mountain climber and skier and partly for his confrontational style.
...

Mr. Haider's parents had been members of the Nazi party, and he sometimes praised aging Third Reich soldiers at their reunions. But he also mixed easily with a younger generation in nightly visits to discos to recruit new party members.

His rallies attracted throngs of young people who responded to Mr. Haider's pleas to banish immigrants and to challenge Austria's two long-reigning parties, the Social Democrats and the more conservative People's Party.
...

At times, Mr. Haider's followers would start singing "Tomorrow Belongs to Me," an anthem from the musical "Cabaret" that symbolized the Nazi takeover of Germany in the 1920s and 1930s.
...

Jörg Haider was born Jan. 26, 1950, in the Austrian town of Bad Goisern. His father had joined the Hitler Youth in 1929 and soon became a storm trooper in the Nazi armed forces. He participated in a failed takeover of the Austrian government in 1934, four years before Germany annexed Austria.

His mother was a member of the Nazi League of German Maidens.

The younger Mr. Haider was a graduate of the University of Vienna and received a law degree in 1973. As a young man, he practiced fencing with a straw dummy labeled with the name of Simon Wiesenthal, the Vienna-based hunter of Nazi war criminals.

Mr. Haider repeatedly denied that he had any links to Nazism or anti-Semitism, but in 1991 he was forced to resign as governor of Carinthia after he praised the Austrian-born Adolf Hitler's "orderly employment program." (He was reelected in 1999.)

To great applause, Mr. Haider lauded a group of Waffen SS veterans at a 1995 reunion as "decent men of character who remained faithful to their ideals."

He was a prominent defender of Kurt Waldheim in the 1980s when the Austrian president and onetime secretary general of the United Nations was exposed as a former officer in the Nazi SS.

Mr. Haider had several Jewish associates in his party, but he often mocked Austria's Jewish leaders and accused his opponents of trying to appeal to interests on the U.S. "East Coast."
...

Mr. Haider lived on a 38,000-acre estate that provided a generous income from inherited forestlands. An uncle had bought the property at a bargain price after its Jewish owners were forced to flee in 1938.

Haider was alone in his car when it crashed. Too bad. It would have been fine with me if a large number of like-minded politicians (and journalists) had been with him at the time.