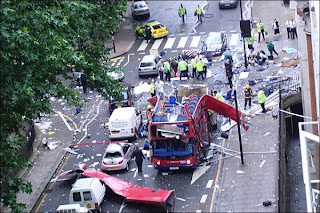 Survivors and families of the victims of the 7/7 London subway bombings "began legal action on Thursday to force the British government to hold an independent inquiry" according to a report from Reuters, which says:

The group argues official accounts of the suicide bombings on London's transport system carried out by four young British Islamists have been insufficient, inaccurate and misleading.
...

The 7/7 inquiry group, made up of bereaved relatives and those who escaped the bombings, says the refusal to hold a public inquiry breaches the European Convention on Human Rights and intends to seek a judicial review of that decision.

Lawyers for the group said the papers were being served at the High Court on Thursday.

As some of us remember, the bombings happened more than two years ago and there has never even been the pretense of an investigation.

The attacks were transparently bogus at the time, so I beg to disagree with Cliff Tibber on one point:

"Firstly we say that the decision of the former Home Secretary (interior minister) not to order an inquiry was irrational," Cliff Tibber, head of litigation at Oury Clark, told Reuters.

Deciding not to order an inquiry after a blatantly false-flag attack is anything but irrational. It's deliberate obstruction of justice. But Cliff Tibber is exactly right on this point:

"Secondly there is a positive duty under article 2 of the Human Rights Act in these circumstances to order an inquiry." The first hearing at the High Court is unlikely to take place until October.

The British government's so-called "justification" for refusing to investigate is as lame as you can possibly imagine:

The government has rejected demands for an independent review of the bombings, which opposition politicians have also called for. It says an inquiry would distract stretched security services when Britain is at serious risk of attack.

"As we have consistently maintained, experience has shown that a fuller public inquiry can take years and divert huge resources," a Home Office spokeswoman said earlier this month.

We can spend billions and kill thousands in a war on terror to avenge this crime and prevent further such events, but we don't have the time or the money to find out what actually happened? It's rubbish, of course, and it smells just like the 9/11 variety, doesn't it?

The alleged suicide bombers allegedy put their bombs in their packs and carried them aboard the trains and buses they rode, and which then blew up. But pictures of the damage seemed to show the undercarriages blasted up rather than down. Oops! Better get rid of those pictures!

The 7/7 inquiry group says there are vital unanswered questions that need to be addressed, particularly how much the authorities knew about two of the bombers, ringleader Mohammad Sidique Khan and Shehzad Tanweer, before the attacks.

They were photographed, recorded and followed by intelligence operatives several times in early 2004 in the company of plotters who have since been jailed for planning attacks using fertilizer-based bombs.

The government said in the aftermath of the July 7 strikes that all the bombers were "clean skins" who had not previously crossed the authorities' radar.

The group says that means an inquiry is needed to determine whether the government had failed in its duty to protect life.

Reuters casts these questions -- questions surrounding the two alleged bombers the government allegedly knew about -- as if they were the heart of the matter. But they're only the beginning of it.

"We would very much like answers to the questions we have raised. We don't understand why we haven't received them," Jacqui Putnam, who was on board the train blown up by Khan, told Reuters.

Maybe distance is important, or maybe background, or maybe both ... but I do understand why they haven't received any answers. It's because the known facts don't fit the official fiction.

Why were there drills going on in the exact same stations at the exact same times as the bombs went off? Because that's the way false-flag attacks are organized. The drills provide cover for anyone who needs it.

Why was Benyamin Netanyahu, then Israeli Finance Minister and former Prime Minister, warned to stay in his hotel that morning, and who from Scotland Yard told him not to board the train in the nearby station which was about to explode? Why were reports of this incident available on the morning of 7/7 but not later -- how did they all suddenly disappear?

If you want more questions, watch this video.

Then watch this one:

And now, if you want some answers, look here (or here).

How the Government Staged the London Bombings in Ten Easy Steps

1) Hire a Crisis Management firm to set up an exercise that parallels the terrorist attack you are going to carry out. Have them run the exercise at the precise locations and at the very same time as the attack. If at any stage of the attack your Arabs get caught, tell the police it was part of an exercise.

2) Hire four Arabs and tell them they're taking part in an important exercise to help defend London from terrorist attacks. Strap them with rucksacks filled with deadly explosives. Tell the Arabs the rucksacks are dummy explosives and wouldn't harm a fly.

3) Tell four Arabs to meet up at London Underground and disperse, each getting on a different train. Make sure Arabs meet in a location where you can get a good mug shot of them all on CCTV which you can later endlessly repeat to drooling masses on television.

Paul nails it! You can read the rest (and click the links) here (or here).

Just in case you needed a reminder, this is it: 9/11 wasn't the only bogus terror attack.

Every large-scale attack underpinning the GWOT is full of fishy holes, just like this one.

And that's why refusing to hold an inquiry was the most rational thing the British authorities could have done.
File under: 7/7, 9/11, Benyamin Netanyahu, bogus terror, GWOT, intelligence
Email ThisBlogThis!Share to TwitterShare to FacebookShare to Pinterest
Posted by Winter Patriot