You Never Know What You're Going To Get 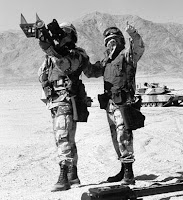 A Florida man took full advantage of a gun amnesty in Orlando, trading a surface-to-air missile launcher for a pair of designer sneakers.

The weapons-collection program, called "Kicks for Guns", offered a pair of sneakers or $50 to anyone who handed in a weapon, no questions asked.

The man said he had found the missile launcher in a shed last week and had failed in his previous attempts to get rid of it, according to the BBC:

"I took it to three dumps to try to get rid of it and they told me to get lost."

After inspecting the rocket launcher, police spokeswoman Sgt Barbara Jones said: "I tell you, you never know what you're going to get."

Nope, you just never know, do you?

A large part of America thought it was getting "a compassionate conservative".

They should have known, of course, that there is no such thing.
File under: BBC
Email ThisBlogThis!Share to TwitterShare to FacebookShare to Pinterest
Posted by Winter Patriot