Bloody Mess: The Surge Is A Success 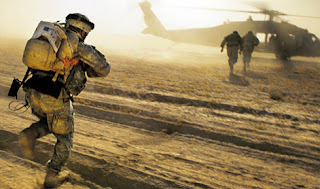 Some of the most excellent reporting we've seen from Iraq has come from Patrick Cockburn, and one of his best recent columns was published Tuesday. I found it at the Belfast Telegraph, and it's a monsterpiece, except for one little detail.

Cockburn says the surge has failed:

Six months after the surge was actually launched, in mid-February, it has failed [...] dismally.
...

The US Defense Department says that, this June, the average number of attacks on US and Iraqi forces, civilian forces and infrastructure peaked at 177.8 per day, higher than in any month since the end of May 2003. The US has failed to gain control of Baghdad. The harvest of bodies picked up every morning first fell and then rose again.
...

The surge is now joining a host of discredited formulae for success and fake turning-points that the US (with the UK tripping along behind) has promoted in Iraq over the past 52 months. In December 2003, there was the capture of Saddam Hussein. Six months later, in June 2004, there was the return of sovereignty to Iraq. "Let freedom reign," said Bush in a highly publicised response. And yet the present Iraqi Prime Minister, Nouri al-Maliki, claims he cannot move a company of soldiers without American permission.

In 2005, there were two elections that were both won handsomely by Shia and Kurdish parties. "Despite endess threats from the killers in their midst," exulted Bush, "nearly 12 million Iraqi citizens came out to vote in a show of hope and solidarity that we should never forget."

In fact, he himself forgot this almost immediately. A year later, the US forced out the first democratically elected Shia prime minister, Ibrahim al-Jaafari, with the then US Ambassador in Baghdad, Zilmay Khalilzad, saying that Bush "doesn't want, doesn't support, and doesn't accept that Jaafari should form the next government".

Well, if not democracy, then how about some security?

There was intense pressure on the US military and the civilian leadership in Baghdad to show that the surge was visibly succeeding. US embassy staff complained that when the pro-war Republican Senator John McCain came to Baghdad and ludicrously claimed that security was fast improving, they were forced to doff their helmets and body armour when standing with him lest the protective equipment might be interpreted as a mute contradiction of the Senator's assertions. When Vice-President Dick Cheney visited the Green Zone, the sirens giving warning of incoming rockets or mortar rounds were kept silent during an attack, to prevent them booming out of every television screen in America.

Ok, there's no security either, even in the Green Zone. So what have the Americans actually brought to Iraq?

On the one hand, there's propaganda and hubris:

US commanders are often cheery believers in their own propaganda, even as the ground is giving way beneath their feet. In Baquba, a provincial capital north-east of Baghdad, US and Iraqi army commanders praised their own achievements at a press conference held over a video link. Chiding media critics for their pessimism, the generals claimed: "The situation in Baquba is reassuring and is under control but there are some rumours circulated by bad people." Within hours Sunni insurgents, possibly irked by these self-congratulatory words, stormed Baquba, kidnapped the mayor and blew up his office.

And on the other hand, death and destruction. Torture, murder, grand larceny. And a cold, calculated instability that the occupiers apparently want to extend -- indefinitely!

The recruitment of Sunni tribal militias by the US is not quite what it seems. In practice, it is a tactic fraught with dangers. In areas where they operate, police are finding more and more bodies, according to the Interior Ministry. Victims often appear to have been killed solely because they were Shia. The gunmen from the tribes are under American command, and this weakens the authority of the Iraqi government, army and police – institutions that the US is supposedly seeking to foster.

A grim scene showing Sunni tribal militiamen in action was recorded on a mobile phone and later appeared on Iraqi websites. It shows a small, terrified man in a brown robe being bundled out of a vehicle by a group of angry men with sub-machine guns who cuff and slap him as he cowers, trying to shield his face with his hands. One of his captors, who seems to be in command, asks him fiercely if he has killed somebody called "Khalid". After a few moments he is dragged off by two gunmen to a patch of waste ground 30 yards away and executed with a burst of machine-gun fire to the chest.

It is a measure of the desperation of the White House to show that the surge is having some success that it is now looking to these Sunni fighters for succour. Often they are former members of anti-American resistance groups such as the 1920 Revolution Brigade and the Army of Islam – Bush has spent four years denouncing these groups as murderous enemies of the Iraqi people. To many Iraqi Shia and Kurds, who make up 80 per cent of all Iraqis, the US appears to be building up its own Sunni militia. So, far from preventing civil war (a main justification for continued occupation), the US is arming sectarian killers engaged in a murder campaign that is tearing Iraq apart.

There's not much new here; the US has been arming "sectarian" killers for quite some time now, in a transparent effort to foment civil war; after all, if peace were to break out in Iraq, the US would have no pretext to justify staying there.

The surge has changed very little in Baghdad. It was always a collection of tactics rather than a strategy. All the main players – Sunni insurgents, Shia militiamen, Iraqi government, Kurds, Iran and Syria – are still in game.

One real benchmark of progress – or lack of it – is the number of Iraqis who have fled for their lives. This figure is still going up. Over one million Iraqis have become Internally Displaced Persons (IDPs) since the Samarra bombing, according to the Red Crescent. A further 2.2 million people have fled the country. This exodus is bigger than anything ever seen in the Middle East, exceeding in size even the flight or expulsion of the Palestinians in 1948. A true sign of progress in Iraq will be when the number of refugees, inside and outside the country, starts to go down.
...

All of this seemingly adds up to a compelling case that the surge has failed.

But what about the larger question? What was the surge intended to accomplish?

The surge was never going to bring Iraq nearer to peace. It always made sense in terms of American, but not Iraqi, politics. It has become a cliché for US politicians to say that there is a "Washington clock" and a " Baghdad clock", which do not operate at the same speed. This has the patronising implication that Iraqis are slothful in moving to fix problems within their country, while the Americans are all get-up-and-go. But the reality is that it is not the clocks, but the agendas, that are different. The Americans and the Iraqis want contrary things.
...

The hidden history of the past four years is that the US wants to defeat the Sunni insurgents but does not want the Shia-Kurdish government to win a total victory. It props up the Iraqi state with one hand and keeps it weak with the other.

The Iraqi intelligence service is not funded through the Iraqi budget, but by the CIA. Iraqi independence is far more circumscribed than the outside world realises. The US is trying to limit the extent of the Shia-Kurdish victory, but by preventing a clear winner emerging in the struggle for Iraq, Washington is ensuring that this bloodiest of wars goes on, with no end in sight.

Aha! Now we've finally reached the bedrock truth. The surge has escalated the war and guaranteed that it will go on, with no end in sight -- exactly what its "architects" have always wanted.

The bodies continue to pile up, the cash continues to flow, and the pressure on Iraq's parliament to sign the Oil Law continues to increase.

And all this is exactly as intended. So it's not a failure at all. Quite the contrary: the surge has been a huge success!

In mid-September, General David Petraeus will report on the "progress" being made by the surge. No matter what he says, the president will decide to continue the surge, and maybe even expand it. This is not rocket science: it's the only thing he can do.