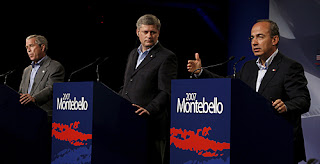 President Bush met with Prime Minster Stephen Harper of Canada and President Felipe Calderón of Mexico [in Montebello, Quebec] on Tuesday at a gathering that focused primarily on strengthening ties and some thorny trade and border issues, but which produced no breakthroughs.

The three laughed off what they called conspiracy theories in the United States and Canada that they were planning to build an American Union with a common currency.

“A couple of my opposition leaders have speculated on massive water diversions and superhighways to the continent — maybe interplanetary, I’m not sure, as well,” Mr. Harper deadpanned.

According to the Los Angeles Times,

Bush chalked up the criticism to "political scare tactics" used by "some who would like to frighten our fellow citizens into believing that relations between us are harmful for our respective peoples.

"If you've been in politics as long as I have, you get used to that kind of technique where you lay out a conspiracy and then force people to try to prove it doesn't exist," Bush said.

All in all, it's quite likely that the undercover cops who were caught trying to foment violence in Montebello were simply trying to preempt all the conspiracy theories that keep popping up about the SPP and the NAU.