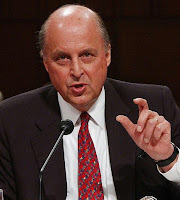 Deputy Secretary of State John Negroponte, one of our most infamous career diplomats, has served in troubled areas such as Vietnam, El Salvador and Iraq, and has reportedly left death squads in his wake in all three countries.

Negroponte is scheduled will visit Pakistan in September, and his itinerary seems almost unfathomably interesting: he's scheduled to arrive on the 10th of September and leave on the 12th.

With all the destabilizing influences currently at work in Pakistan; considering Pakistan's still largely unexplored relationship with the events of September 11, 2001; with all that's been going on here, and all that's already scheduled to happen here on that day, I can't help but ask myself:

"Why would the State Department want its death squad specialist in Pakistan on September 11th?"

It's probably just a coincidence, right? 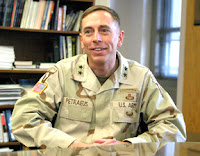 It's probably also coincidental that General David Petraeus is scheduled to testify before Congress on the 15th of September, which just happens to fall on a Saturday.

So it's probably also just a coincidence that they're thinking of having him testify on the previous Tuesday.

There wouldn't be any professional or political value in having General Petraeus testify about the Surge in Iraq on the anniversary of the September 11 attacks, would there?

The much-anticipated surge report is still expected September 15th, but it will be written by White House staff. And that's probably coincidental, too.
File under: coincidence, David Petraeus, Iraq, John Negroponte, Pakistan
Email ThisBlogThis!Share to TwitterShare to FacebookShare to Pinterest
Posted by Winter Patriot