What Else Is New? ABC Declines To Answer For Outrageous Coverage 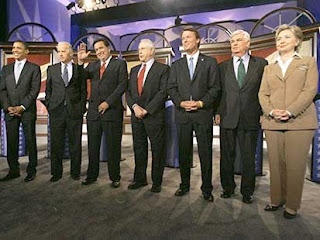 Among the "outrages" that have energized tens of thousands of Kucinich supporters - and even non-supporters - thousands of whom have flooded the ABC News website and other online news sites with comments of protest:

* Congressman Kucinich was apparently deliberately cropped out of a "Politics Page" photo of the candidates [see photo].

* Sometime Monday afternoon, after Congressman Kucinich took a commanding lead in ABC's own on-line "Who won the Democratic debate" survey, the survey was dropped from prominence on the website.

* ABC News has not officially reported the results of its online survey.

* After the results of that survey showed Congressman Kucinich winning handily, ABC News, sometime Monday afternoon, replaced the original survey with a second survey asking "Who is winning the Democratic debate?"

* During the early voting Monday afternoon and evening, U.S. Senator Barack Obama was in the lead. By sometime late Monday or early Tuesday morning, Congressman Kucinich regained the lead by a wide margin in this second survey.

* AND, as every viewer of the nationally televised Sunday Presidential forum is aware, Congressman Kucinich was not given an opportunity to answer a question from moderator George Stephanopoulos until 28 minutes into the program.

Are you surprised? I'm not!!

Why do you think they call it "the liberal media"?
File under: Dennis Kucinich, liberal media
Email ThisBlogThis!Share to TwitterShare to FacebookShare to Pinterest
Posted by Winter Patriot