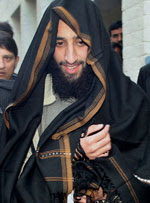 After more than a year of detention, Rashid Rauf, alleged mastermind of the so-called "Liquid Bombers plot", will be brought before Pakistan's Federal Review Board later today, according to a report from the Daily Times.

“We will present Rashid Rauf and Raingzieb Ahmed before the Federal Review Board (FRB) on Friday, where the judges will decide the fate of their cases,” a law enforcement agency source told Daily Times on Thursday.

Rauf was arrested on August 9, 2006, in Multan while headed for Rawalpindi.

If this is true, then one of the stories we've been told, that Rashid Rauf was tortured for several days before he revealed the names of the British co-conspirators, is false, because the 25 people arrested in Britain were picked up on the 9th and 10th of August. The alternative tale, that Rashid Rauf (or a friend) sent a text message to the British co-conspirators saying to go ahead with the plot, would appear to be the only remaining credible explanation, if it were credible at all. Only one of the people arrested last August had an airline ticket. Some had not even applied for passports. Were they expected to board planes without tickets of passports because they got a text message from a stranger in a foreign country?

According to the most recent reliable reports, Rashid Rauf is charged with possession of objects for the purposes of terrorism, specifically 29 bottles of hydrogen peroxide that supposedly threatens airliners traveling from the UK to the USA. He also faces charges of forgery and impersonation in regard to allegedly carrying false papers. But this is not considered a terrorist offense and the Federal Review Board, as I understand it, must dispose of the terror-related charge first.

Of the 25 Britons arrested last August 9th and 10th, ten have been released without charge and the remaining 15 are due to stand trial beginning in the spring of 2008. In another few hours we may know whether Rashid Rauf will be joining them.

But on the other hand, we may still know nothing. The Pakistani legal system has a way of moving people backwards. Detentions get extended, charges never actually get formalized, decisions get reversed and appealed and reinstated.

So for example, the terror-related charges against Rashid Rauf were dropped last December but quietly reinstated a short time later. He was brought to court several months after his arrest but the police had not yet filled out a proper charge sheet. He was promised a quick appearance months ago and instead the term of his detention has been repeatedly extended.

I will try to keep you posted on the strange and bogus case of Rashid Rauf, alleged mastermind.