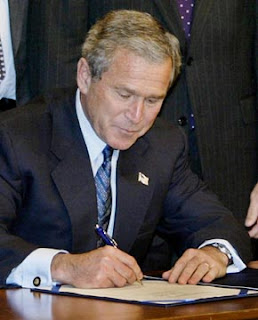 As expected, our hungry president has wasted no time in devouring the tasty morsel offered up by Congress this weekend. As usual, the feast was garnished with a dollop of Orwellian nonsense.

As reported by the AP via USA Today,

CAMP DAVID, Md. (AP) — President Bush on Sunday signed into law an expansion of the government's power to eavesdrop on foreign terror suspects without the need for warrants.

The law, approved by the Senate and the House just before Congress adjourned for its summer break, was deemed a priority by Bush and his chief intelligence officials.

Bush signed the bill into law on Sunday afternoon at his retreat at Camp David, Md.

The power-feast brings to a close another tidy series of seemingly well-orchestrated events. The House passed the bill late Saturday night, after the Senate passed it on Friday night, after the president and his charming representative, Dana Perrino, threatened to cancel their summer vacation.

Thus are Congressional priorities and motivations revealed. And now for the dollop:

"When our intelligence professionals have the legal tools to gather information about the intentions of our enemies, America is safer," Bush said. "And when these same legal tools also protect the civil liberties of Americans, then we can have the confidence to know that we can preserve our freedoms while making America safer."

It doesn't take a rocket scientist to notice that all this blather is conditional. Hypothetical. When this, When that ...

But listen: When do the same legal tools that authorize warrantless surveillance -- in direct contravention of the Fourth Amendment -- protect the civil liberties of Americans?

How could that ever happen?

How can broadening a program that allows secret wiretapping protect anyone's civil liberties?

Other than those of the unitary executive, of course.

Civil liberties groups and many Democrats say it goes too far, possibly enabling the government to wiretap U.S. residents communicating with overseas parties without adequate oversight from courts or Congress.

Possibly? One cannot help but laugh at the weakness of the so-called protests. This law will definitely enable the government to wiretap U.S. residents -- and foreigners -- communicating with anyone at all (or even communicating with nobody -- just sending themselves reminders via email!). And there will be no oversight at all from courts or Congress.

The new law has been sold and passed as a vital tool in the fight against terrorism, but al-Q'aeda terrorists, trained in CIA-style tradecraft, meet in person for critical communications since they know their phone and email channels are insecure. So the new law's anti-terrorist implications will be quite limited.

But law-abiding American citizens are not nearly so circumspect. And aside from its negligible anti-terrorist implications, the new law will allow the government to wiretap any and all political opponents -- or as the administration considers them, "enemies" -- without even leaving a paper trail behind.

It's quite a tasty feast indeed. But as always when feeding the hunger for power, each meal only serves to increase the appetite. Thus, according to the administration, the new law doesn't go far enough, or last long enough, so it will have to be renewed, and expanded, again and again and again ...

"We must remember that our work is not done," Bush prodded.

There's always an element of truth in the spin, and this is our truth for today:

Their work is not done, and it never will be.

Eliminating the inalienable rights of 300 million people is a big job.

This is going to be a long war.
File under: FISA, intelligence, unitary executive, warrantless, wiretapping
Email ThisBlogThis!Share to TwitterShare to FacebookShare to Pinterest
Posted by Winter Patriot