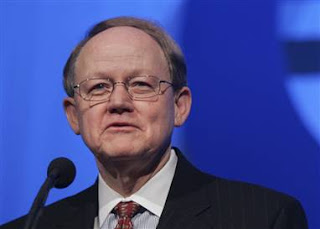 Mike McConnell, the Director of National Intelligence and America's highest-ranking intelligence official, revealed many previously classified details of an extremely sensitive "terrorist surveillance" program last week in an interview with the El Paso Times, which posted a transcript on its website Wednesday.

McConnell apparently made the revelations deliberately, in an effort to influence public perception of the surveillance program, even while observing that doing so would cost American lives! Here's an excerpt from the transcript:

[Chris Roberts] Even if it's perception, how do you deal with that? You have to do public relations, I assume.

[Mike McConnell] Well, one of the things you do is you talk to reporters. And you give them the facts the best you can. Now part of this is a classified world. The fact we're doing it this way means that some Americans are going to die, because we do this mission unknown to the bad guys because they're using a process that we can exploit and the more we talk about it, the more they will go with an alternative means and when they go to an alternative means, remember what I said, a significant portion of what we do, this is not just threats against the United States, this is war in Afghanistan and Iraq.

[Chris Roberts] So you're saying that the reporting and the debate in Congress means that some Americans are going to die?

[Mike McConnell] That's what I mean. Because we have made it so public. We used to do these things very differently, but for whatever reason, you know, it's a democratic process and sunshine's a good thing. We need to have the debate. [...]

Can anyone explain why we couldn't have had the debate before the bill was rushed through Congress?
I wasn't supposed to ask about that, was I? Chris Roberts certainly didn't ask.

Can anyone explain why Congress is granted no specific oversight? Why should it only be able to look at process and not detail? That makes no sense to me. But Chris Roberts didn't ask about that either.

There are about a thousand other questions that come to mind and I submit that Chris Roberts couldn't have asked them all; I can't even type them all unless I want my fingers to fall off. But the whole story reeks of heavy spin.

For instance, McConnell talks about the need to recruit intelligence personnel who have expertise in foreign languages and cultures:

Particularly with the current problem of terrorism, we need to have speakers of Urdu and Farsi and Arabic and people from those cultures that understand the issues of tribes and clans and all the things that go with understanding that part of the world. Varying religions and so on. Because it is, it's almost impossible, I've had the chance to live in the Middle East for years, I've studied it for years, it's impossible to understand it without having some feel for the culture and so on.

As C. at Afghanistanica notes, our intelligence community needs such people, but it must not need them very badly:

Out of fourteen applicants that I’m aware of only two have passed the security clearance process.

The students applied to the CIA, NSA, State Department and the US military. The rejections came for a variety of reasons:

1. Participation in a study abroad program in Turkey.
2. Dated a Chinese girl for a few months.
3. Friends with a non-Persian Iranian who has been an American for quite some time.
4. Currently dating a girl from an extremely moderate “Muslim” country.
5. Taught English in Turkey.
6. Studied in Kazakhstan.
7. Dual citizenship with NATO country.
8. Married to a foreigner.
9. Polygraph examiners rejected guy who was too calm.
10. Dated someone from Latin America.
11. Traveled in the Middle East.

I wonder if the answer is hiding in plain sight:

I know these people and I can assure you that if Al Qaeda approached them with a bag full of coke and a roll of cash, they would not be persuaded to betray their country.

What? Decent, loyal Americans? Some days it seems to me that we've got too many of that kind already!

Above all, I can't help fantasizing that national security officers should focus on enhancing our security and that of the people who allegedly protect us, rather than jeopardizing us and them at the same time. So it bothers me when a national security officer endangers the lives of other Americans by speaking freely about a top-secret intelligence program for political reasons.

McConnell would probably dispute my use of the word "political". As he puts it,

I'm an apolitical figure. I'm not a Republican, I'm not a Democrat. I have voted for both. My job is as a professional to try to do this job the best way I can in terms of, from the intelligence community, protect the nation.

New intelligence director John “Mike” McConnell, who served as NSA director from 1992-1996, is currently a vice president at Booz Allen, one of the largest consulting and engineering companies in the world.

His work there could represent a potential conflict of interest…

Booz Allen is known for its close ties to the intelligence community - former CIA director James Woolsey is also a VP at the firm. And it’s done extensive work for the Pentagon with more than $3 billion in contracts from 1998-2003.

But what’s most interesting about Booz Allen’s recent activity is getting hired by the CIA to be the “independent” outside auditor of the CIA and Treasury Department’s Terrorist Finance Tracking Program [...]

And apart from that, this interview was clearly done for "public diplomacy" reasons, and that's politics whether they admit it or not.

As I was saying, it bothers me when a national security officer endangers the lives of other Americans by speaking freely about a top-secret intelligence program for political reasons -- especially if he admits it while he's doing it!

How Orwellian can it get?

I'm afraid Randy Bachman had the answer to that one: