Don't Believe Everything You Hear 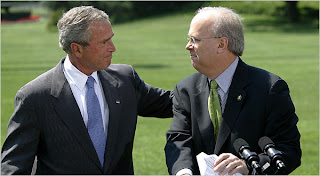 It's the strangest thing. It's as if a football coach left the sidelines during a game to go sit in the press box, and the other team and their fans -- millions and millions of fans all over the world -- went wild!

Nothing like this has happened since Dumsfeld resigned in disgrace. He may still have an office in the Pentagon, but he's only running a staff of seven. I'm still celebrating over that one -- how about you?

I cannot comment further on the ripple effects of Karl Rove's redeployment, except to deny the irresponsible rumors that have been circulating all over the internet, to the effect that I have been offered his job in the White House beginning in September.

That's not true. I haven't even had my interview ... yet!

We haven't had a song in a long time and that's my fault; today's tune is by the late great Lowell George of Little Feat, and it's called

The Rat looked hard at Gunboat Bill
then he said in a serious style
as he leaped into the water
"Don't believe, no don't believe,
don't believe everything that your hear!"