Chick-A-Boom: Liberal Media All Over Rove 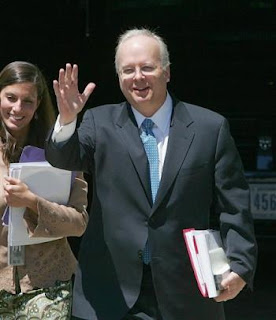 Karl Rove, also known as Bush's Brain, the amoral political operative with the top-secret security clearances, has announced his intention to leave his post at the White House effective the beginning of next month, as some of you may have heard.

What you may not have heard is how the liberal media -- epitomized by the Washington Post and the New York Times -- have been using this national tragedy for their own ends, sensationalizing their reporting about Mr. Rove's past until the historical details are barely recognizable.

For instance, Mr. Rove happened to hint the other day that he might write a book. The WaPo, instead of taking the politically correct approach, detailed a reporter to probe deeply into the suggestion, asking such questions as how much a publisher might pay for such a thing, and how candid Mr. Rove could afford to be. For the WaPo, the key question seems to be: "Can he be candid and remain loyal?"

Somehow the WaPo didn't manage to ask how Mr. Rove could be candid and stay out of prison.

The New York Times has been aggressive -- some friends and supporters of Mr. Rove might say intrusive -- in its coverage of Mr. Rove's opinion of Hillary Clinton's candidacy.

Why anyone should care what Karl Rove thinks of Hillary Clinton is a mystery only to the politically naive. I will explain it to you as soon as I figure it out.

But in the meantime, Chick-a-boom!

Don'cha just love the way the liberal media holds their grimy feet to the fire?

Look, everybody, look how great the system works!