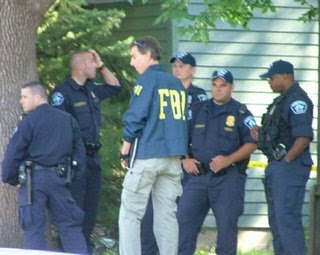 To celebrate our freedom and the Republican National Convention, SWAT teams in Minnesota have attacked peaceful, law-abiding people who might or might not have been planning to exercise some of their First Amendment rights. Instead, they got a dose of the New American Century, with militarized police invading their homes, holding them at gunpoint, and seizing -- without a warrant -- their computers, notebooks, and other personal effects.

Glenn Greenwald has more and more and Chris Floyd has more too including more from Arthur Silber, all of which is all well worth reading, in my cold opinion.

On second thought, and after reading through those links again (especially Chris and Arthur), perhaps I was mistaken. It could be that the Feds aren't celebrating our freedom at all, only defending a corrupt system which feeds them and pays their mortgages.

And here we come to one of the bedrock dichotomies (read: lies) of modern American politics: the politicians and pundits tell us that our freedom is dependent on political stability, but in fact political stability (or at least the kind they care about) can only be maintained at the expense of freedom -- your freedom.

It's the old "we had to destroy it in order to save it" argument again, only this time we're not talking about a hamlet half a world away, but about your future, and the future of your children.