Bush Tells UN To Unite Against Terrorism And Tyrrany 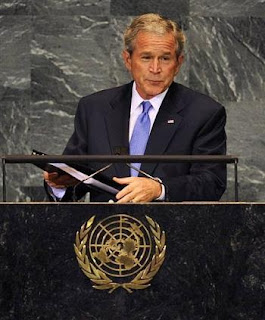 The twice-unelected president and smirking multi-front war criminal George W. Bush told the United Nations on Tuesday that the world must unite against terrorism and tyranny, according to the AP via MSNBC.

Unfortunately, the world's top diplomats have already decided that Bush is a buffoon, and as usual they weren't paying any attention.

If they had been, Bush would have been led away from the podium in handcuffs, and taken straight to the guillotines.