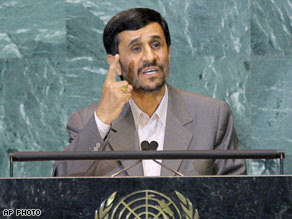 Iranian President Mahmoud Ahmadinejad offended quite a few people with his pointed remarks at the UN, as CNN reports:

"As long as the aggressors, because of their financial, political and propaganda powers, not only escape punishment, but even claim righteousness, and as long as wars are started and nations are enslaved in order to win votes in elections, not only will the problems of the global community remain unsolved, but they will be increasingly exacerbated," the Iranian leader said.

He accused the United States of oppressing Iraqis with six years of occupation, saying Americans were "still seeking to solidify their position in the political geography of the region and to dominate oil resources."

This is particularly offensive to American media and political types not just because it's true, but because it's verboten truth.

Nobody in American TV-land can say these things, even though they are obviously correct.

Meanwhile, he said, Palestinians have undergone "60 years of carnage and invasion ... at the hands of some criminal and occupying Zionists."

He said Zionists in Israel "have forged a regime through collecting people from various parts of the world and bringing them to other people's land, by displacing, detaining and killing the true owners of that land."

The Security Council, he said, "cannot do anything, and sometimes under pressure from a few bullying powers, even paves the way for supporting these Zionist murders."

Unable to refute any of this, CNN defers to a famous lie:

He stopped short of calling for Israel to be politically wiped off the map as he has in the past.

The fact that he has never said anything of the sort is clearly of no consequence to CNN -- not when there's an opportunity to fan the flames of fiction.

In the fictional media account, Mahmoud Ahmadinejad is dangerous because of fearsome weapons that he doesn't have, and threatening statements that he's never made.

But in reality, he's a dangerous man because he suggests things like:

"a free referendum in Palestine for determining and establishing the type of state in the entire Palestinian lands."

Such a referendum -- direct independent democracy at its finest -- can never be allowed to happen, of course, because that would be the end of Israel.

And that's why the [Jewish]

Anti-Defamation League released a statement saying the Iranian leader showed he "is deeply infected with anti-Semitism" and displayed "the true threat the Iranian regime poses to Israel, the United States and the West."

The ADL says this so often and it gets published so everywhere and so unquestioningly...

Anti-Zionism is not the same as anti-Semitism. It's not even close. Only the deliberately, willfully ignorant -- and those who wish you were equally ignorant -- fail to see the distinction.

It's not the "anti-Semitism" that makes Ahmadinejad dangerous. That's only a cover story. The true threat Mahmoud Ahmadinejad poses -- to Israel, to the United States and to the West -- lies in his willingness to speak the verboten truth.

And that's a big problem for our "news" providers, because they can't just cancel his show.