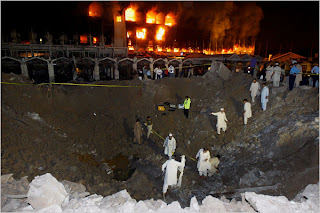 In a phone call to an Islamabad TV station, "a group calling itself Fedayeen-i-Islam" has claimed responsibility for the bombing of the Marriott Hotel in Islamabad, according to the Pakistani newspaper Dawn.

Fedayeen-i-Islam is "a little-known group" according to Bloomberg. But just how little-known?

“We have not heard the name of the organisation but we are trying to locate its network.”

Ever since Saturday night's bombing the media have been wrestling with the big question: "Why did al Qaeda do this?"

But now they have to deal with a different question: "How is Fedayeen-i-Islam related to al Qaeda?"

It goes without saying that Fedayeen-i-Islam must be a violent radical Islamofascist group and that they must have bombed the hotel. And they must have been assisted, if not directed, by al Qaeda, and probably the Taliban as well. After all, who else but the world's most violent Islamic terrorists could make an anonymous phone call to a TV station?

It's nice to know the big questions are looked after. That gives us leeway -- here in the frozen corners of the blogosphere -- to ask meaningless little insignificant questions, like:

What were US Marines doing in the Marriott Hotel just before the attack?

According to Pakistan Daily, after the blast, a fire broke out on the fourth and fifth floors of the hotel. 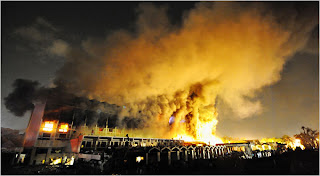 Why these floors and not the others? The official explanation didn't make much sense. On the other hand, according to an eyewitness report from a member of Pakistan's Parliament, a group of US Marines had recently visited the hotel, while Admiral Mike Mullen was there.

According to the eyewitness, all access to the hotel was closed off while the Marines unloaded steel boxes from a white US Embassy truck, bypassed both Pakistani and hotel security, and took these boxes directly to the fourth and fifth floors of the hotel -- just where the fires mysteriously broke out.

Were the Marines loading the building with incendiaries? It certainly wouldn't be the first time a building was primed by insiders for a subsequent "terrorist attack".

I wasn't kidding in my prior post when I called the Marriott bombing "Pakistan's 9/11". But I didn't explain myself particularly well, either.

There's a long list of similarities between the two attacks, including the rush by both politicians and the media to cast the event as "an attack on democracy", when in both cases the attacks came at critical times for governments which falsely claimed to have been legitimately elected.

Pakistani President Asif Ali Zardari can now claim to be in an all-out war against radical Islamic terrorists, and he may even be able to build up enough "political capital" to drag his nation in a direction in which it doesn't wish to go.

As usual, the attack has been followed by a barrage of media nonsense, such as a report from the Financial Times which says men with ties to al Qaeda have been arrested in Pakistan in connection with the Marriott bombing.

Pakistani investigators yesterday said they had found new evidence of al-Qaeda's involvement in the suicide truck bombing of Islamabad's Marriott hotel. Intelligence officials also reported the arrest of up to five militants in connection with planning attacks [...]

According to an intelligence official, two of the five arrested men "came with conclusive evidence of close links to al-Qaeda. Their connection to the militant group is beyond any doubt."

Let's see now: The police are arresting members of one group while another group claims responsibility. Does this not undermine the claims of the police?

If you were tripped up by this little bit of logic, you must be a Democrat, since according to the Republicans, the Democrats have failed to learn the lessons of September 11th, 2001.

And the primary lesson from September 11th, of course, is that logic, evidence, and science are all past their prime. As the AP reported (via the Toronto Star): 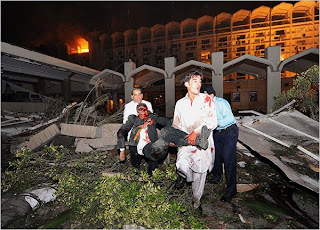 What matters is that the media and the politicians have already decided who's going to be blamed, and who's going to pay the price. And once again -- just like 9/11 -- it won't be the perpetrators.

UPDATE: The eyewitness referred to in the above account is denying a report published in The News which contains some of the same allegations described above, according to a comment posted on a thread where my piece is being discussed at Pak Links dot com.

Here's the disputed piece in full, from The News, for the record:

Was it an attack on US Marines?

ISLAMABAD: Was there a top secret and mysterious operation of the US Marines going on inside the Marriott when it was attacked on Saturday evening? No one will confirm it but circumstantial evidence is in abundance.

Witnessed by many, including a PPP MNA and his friends, a US embassy truckload of steel boxes was unloaded and shifted inside the Marriott Hotel on the same night when Admiral Mike Mullen met Prime Minister Yousuf Raza Gilani and others in Islamabad.

Both the main gates (the entrance and the exit) of the hotel were closed while no one except the US Marines were either allowed to go near the truck or get the steel boxes unloaded or shift them inside the hotel. These steel boxes were not passed through the scanners installed at the entrance of the hotel lobby and were reportedly shifted to the fourth and fifth floors of the Marriott.

Besides several others, PPP MNA Mumtaz Alam Gilani and his two friends, Sajjad Chaudhry, a PPP leader, and one Bashir Nadeem, witnessed this mysterious activity to which no one other than the PPP MNA objected and protested.

A source present there told The News that after entertaining them with refreshments at the Nadia restaurant at midnight when Mumtaz Alam, along with his friends, was to leave the hotel, he found a white US embassy truck standing right in front of the hotel's main entrance.

Both the In-gate and the Out-gate of the hotel were closed while almost a dozen well-built US Marines in their usual fatigues were unloading the steel boxes from the truck. No one, including the hotel security men, was either allowed to go near the truck or touch the steel boxes, which were being shifted inside the hotel but without passing through the scanners.

Upon inquiry, one of the three PPP friends who was waiting for the main gates of the hotel to open to get his car in, was informed that the suspicious boxes were shifted to the fourth and fifth floors of the hotel. Mumtaz Alam was furious both at the US Marines and the hotel security not only for the delay caused to them but also for the security lapse he was witnessing.

On his protest, there was absolutely no response from the Marines and the security men he approached were found helpless. Mumtaz Alam told the hotel security official that they were going to endanger the hotel and its security. He was also heard telling his friends that he would never visit the hotel again. He also threatened to raise the issue in parliament.

One does not know whether the PPP MNA revisited the hotel after that mysterious midnight but his brother Imtiaz Alam, who is a senior journalist, was in the same hotel when the truck exploded at the main gate of the hotel. Imtiaz Alam had a lucky escape and found his way out of the hotel with great difficulty in pitch darkness.

One of the lifts he was using fell to the ground floor just after he forced the door open on the 4th floor and got out of it.

The comment, from Lycanthropy of Karachi, runs as follows [I've converted the URLs to links]:

Unfortunately, the MNA reported to be a witness of the US Marines incident, (Mumtaz Alam Gillani, National Assembly Member PPP), is not backing up the report, and is even threatening to sue Ansar Abbasi (the journalist who published this report quoting unknown eyewitnesses), if he does not debunk his article soon.

it's even on his Wiki page:

The report might still be true, but maybe the MNA is not backing it up personally to avoid trouble for himself.

And the article mentioned in the comment runs as follows [I've added emphasis, space, and a few extra words, for clarity]:

ISLAMABAD: Mumtaz Alam Gillani, member [of the] national assembly (PPP) [Pakistan People's Party] on Monday strongly contradicted a news item appearing in a section of the press on September 21 that he was witness to a US embassy white truck carrying steel boxes, which were unloaded and shifted inside the Marriott hotel.

Mumtaz Alam Gillani told APP that this was just a conversation in a light mood with the reporter when he along with his friends was coming out of the hotel and some foreigners were going inside the hotel. “I had just roadside chit-chat in a friendly manner with the newsman and told him that Pakistan is a victim of terrorism”, Gillani clarified.

He further said he would be issuing a legal notice to the reporter of the newspaper whose story is based on “pack of lies” and contrary to all professional ethics.

“I have asked the reporter to contradict the news item and tender unconditional apology as he tried to belittle my image as member of parliament in the eyes of the people, particularly of my constituency”, Mumtaz Alam Gillani said.

The MNA further said that on expiry of 10-day notice if the apology is not tendered and contradiction not issued, he will sue the reporter and the newspapers in a Court of law. — APP [Associated Press of Pakistan]

Ansar Abbasi replies: The PPP MNA Mumtaz Alam Gillani has the right to go to the court of law but he needs to be corrected on the fact that I never spoke to him whether in a light mood or seriously. Rather we never had any interaction either on the night of September 16 or before; nor even after that, though I tried to contact him on the night of September 16 but his mobile phone did not respond.

The story in question was based on the eyewitness account of a source, [who] narrated the whole episode of what many witnessed that night. The source also quoted the PPP MNA objecting and protesting to the Marines’ activity. He was also shouting thus attracting the attention of several others.

The PPP MNA is also not mentioning the fact when he claims of talking to “reporter” and seeking contradiction of the story and unconditional apology. Nowhere in story the image of the MNA was belittled rather he was reported to have objected to the lapse of security that he witnessed when the Marines were shifting the steel cases inside the hotel.

Mr Gillani talks of “facts”, which are neither relevant to my story nor true. While Gillani “strongly contradicted” the story, one of his friends, accompanying him on the night of September 16 to Marriott, confirmed the facts as stated in The News story.

Meanwhile, the US embassy spokesman on Monday when asked about the September 16 activity did not deny this and said, “A team of support personnel often and routinely precede and/or accompany certain US government officials. They often carry communications and office equipment required to support large delegations, such as high-level administration officials and members of the US Congress. The Chairman of the Joint Chiefs of Staff would travel with communications equipment. It is quite possible that some saw this communications equipment moved into the hotel. This equipment would leave with the CJCS. If the equipment was transported in full public view then obviously there was no attempt made to conceal its movement.”

The News stands by the story.