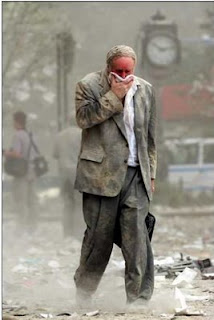 I've seen a remarkable number of mentions of 9/11 in connection with the current so-called "financial crisis". Most of them have come from people who seem to have no knowledge of or interest in what actually happened on 9/11. And yet they all seem to "get" the parallel. How odd. Or maybe not.

It's an inside job -- a terrorist attack of unprecedented scope and scale -- enabled by statements from politicians and the media which are chock-full of lies and spin.

There was nothing sudden about it; it was forseen by many and could have been prevented if the government had wanted to prevent it.

Instead it has been encouraged, and facilitated, by the very people who claim to be keeping you safe. But you can see that they don't want you to feel safe. They want you to be afraid, very afraid.

At Wednesday's House hearing, Rep. Steve LaTourette cut to the chase, summing up the frustration of members who think their constituents aren't getting the gravity of the situation from the dispassionate Bernanke and Paulson show.

LaTourette began talking about "my guy on the couch" back home in his district who was hassled by his boss and angered about doubts he'll be able to get a new car, keep his job, retain his credit card and save for his daughter's education.

"He's scared because he's the first generation who can't pass on the American dream to his daughter," said the Ohio Republican -- adding, "In order to accept this plan...he needs to be more scared."

“He should be angry and he should be scared – and I think right now he’s angrier than he is scared,” said Paulson “And it puts us in a difficult position—no one likes to be painting an overly dire picture and scaring people, but the fact is that if the financial markets are not stabilized the situation can be very severe as it relates not just to his current situation – but keeping his job… this is a serious situation and one he should be concerned about.”

Your fear will be managed and amplified and used as a weapon with which to rob you of your future income and personal security. In the larger picture, millions of lives will be destroyed and a very few will be enriched.

The administration that was elected on a promise of "small government" is using this situation to attempt another enormous power grab, trying to increase the powers of appointed officials while bypassing the courts.

And congress is working overtime -- even as I type -- to write new legislation enabling this outrageous abuse of government to continue.

I've studied enough economics to know that the entire "science" is manure. It's not a science at all; it's a bogus belief system built on invisible premises that just happen to be false.

For economists, their entire world-view depends on this obvious lie. And yet they build intricate simulations and prediction systems on it, and they get frustrated when "the people" don't act according to "the model".

Because of this all-encompassing reliance on the lie and the model rather than reality, nobody trained in "economics" can possibly tell the truth. They can't even see the truth. And that's why I ran away from this so-called discipline as fast as I could, as soon as I realized what it was.

The people who are looking for a handout in this so-called crisis are the scum of the earth, in my opinion. Their request for government money is the epitome of greed gone wild. But it's exactly what we can always expect from the parasites who suck the blood of the system.

Market speculators -- in currency and real estate especially -- add no value to anything; they only add to the prices of things. Rather than designing and building products, or serving the needs of society in some other way, they spend their lives building extensive portfolios of imaginary money which they consider "wealth".

This "wealth" exists only insofar as other people are willing to pay for the elements of their portfolios, and as long as nobody else knows that a portfolio is essentially worthless, the owner of worthless garbage can consider himself "successful", and even "wealthy".

So, in real estate, for instance, speculators buy and sell and flip and flip again, and all this action drives up the price of housing -- which for most people is an essential commodity. Because of the speculation in the housing market, values are artificially inflated to the point where people can't afford the houses, but in the meantime the houses are deteriorating and their actual values are falling.

And eventually it becomes clear to all who will look that the incessant flipping is driving an increase in homelessness, but do the speculators care? NO! They're just busy keepin' up with the other portfolio-builders in their high and mighty society. Or at least they were.

But now they want hundreds of billions of your dollars because it turns out that they can no longer hide the fact that they've been spending way too much for way too little.

What should the government tell them? That they should go out and get jobs like everybody else. That they should create products, or provide services, and earn an honest living for a change -- if they can!

But instead the government wants you to buy the portfolios the speculators can't sell to anyone else.

We hear all the time about how the economy will never survive unless the speculators with the worthless portfolios are bailed out. But -- just like the case in 9/11 -- the fact of the matter is quite the opposite from the official story.

The market will survive -- if it survives at all -- just like a sick body heals itself: by purging itself of toxins, and of the parasites that produce them.

This is how a free market is supposed to work; as the Republicans try to tell us all the time, it's the ownership society and you are responsible for your decisions. If you've bought a portfolio of garbage, you're stuck with it, chump. Caveat emptor, baby, and you have no right to foist your mistakes off on anybody else.

But that's exactly what this bailout is: the government buying worthless securities at highly inflated prices from people who never should have bought them in the first place.

New York Times columnist Paul Krugman describes the portfolios in question as "toxic waste" and claims the "grown-up" thing for the government to do is to force the taxpayers to buy all of it. As if we need any more toxic waste.

My five-year-old son uses the word "grown-up". My eight-year-old says "adult". In this context Krugman's vocabulary reminds me of a six-year-old. And so does his reasoning.

Perhaps we cannot expect Paul Krugman -- who was trained as an economist, after all -- to see the truth of the matter. And we certainly cannot expect the NYT to print the truth even if they had somebody on staff willing and able to write it. But the adult thing to do would be to let market rid itself of the parasites and the toxins, just the way it's supposed to work.

The programs endorsed by Krugman and every other bailout proponent amount to robbing from the poor and innocent to give to the rich and guilty, under cover of extreme fear deliberately induced by our own government and media.

And guess what? It's just like 9/11 all over again, and from an administration whose only claim to success was that it supposedly protected us from such things.

I'm just ranting here of course but there's much more to be said, and you may as well start with Chris Floyd's most recent, "The Resurrectionists: Beltway's Big Money Cultists Bail Out the Dead".