Execution In Iraq: Murder Charges Against Three Army Sergeants, None Against Those Who Sent Them There 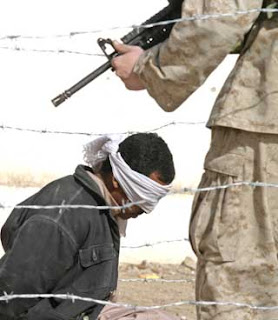 The four men were handcuffed and blindfolded, then taken out and shot in the head. Two of the killers, acting on instructions from the third, removed the plastic handcuffs and the bloody blindfolds, and shoved the bodies into a canal. Then the three killers left the scene and rejoined their unit. Ho hum.

according to an Army statement released last week, as reported in a short AP dispatch carried by the Washington Post.

Paul Von Zielbauer of the New York Times had reported back in August that Hatley, Mayo and Leahy would probably be charged with murder. He also reported much more detail about this story, including the following:

The accounts of and confessions to the killings, by Sgt. First Class Joseph P. Mayo, the platoon sergeant, and Sgt. Michael P. Leahy Jr., [...] senior medic and an acting squad leader, were made in January in signed statements to Army investigators in Schweinfurt, Germany.

In their statements, Sergeants Mayo and Leahy each described killing at least one of the Iraqi detainees on instructions from First Sgt. John E. Hatley, who the soldiers said killed two of the detainees with pistol shots to the back of their heads. [...]

In their sworn statements, Sergeants Mayo and Leahy described the events that preceded the shooting of the Iraqi men, who apparently were Shiite fighters linked to the Mahdi Army militia, which controlled the West Rashid area of southwest Baghdad.

After taking small-arms fire, the patrol chased some men into a building, arresting them and finding several automatic weapons, grenades and a sniper rifle, they said. On the way to their combat outpost, Sergeant Hatley’s convoy was informed by Army superiors that the evidence to detain the Iraqis was insufficient, Sergeant Leahy said in his statement. The unit was told to release the men, according to the statement.

“First Sergeant Hatley then made the call to take the detainees to a canal and kill them,” Sergeant Leahy said [...]

“So the patrol went to the canal, and [...] Mayo and I took the detainees out of the back of the Bradley, lined them up and shot them,” Sergeant Leahy said, referring to a Bradley fighting vehicle. “We then pushed the bodies into the canal and left.” 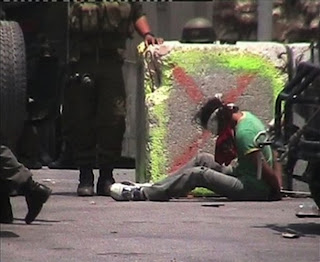 Assuming Von Zielbauer's account is correct, I have no argument with the Army's position that what Hatley and his men did to four disarmed and utterly defenseless men was murder, and that charges against the killers are appropriate.

The difference is one of scale, and scope, and power.

If John Hatley, Joseph Mayo and Michael Leahy, Jr. -- three platoon-level leaders -- go to the dock for murdering four defenseless victims, then who goes to the dock for what Bush, Cheney, Rumsfeld, Powell and all their lying associates did to Iraq?