Congratulations! We Just Spent $700B On Toxic Waste 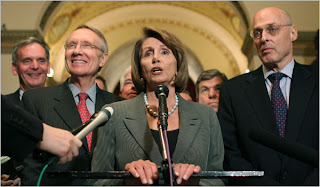 Congressional leaders and the Bush administration reached a tentative agreement early Sunday on what may become the largest financial bailout in American history, authorizing the Treasury to purchase $700 billion in troubled debt from ailing firms in an extraordinary intervention to prevent widespread economic collapse.

Thus reports the New York Times, along with a photo (reproduced here) of Nancy Pelosi, Harry Reid and Henry Paulson delivering the news to the world. The NYT continues:

Officials said that Congressional staff members would work through the night to finalize the language of the agreement and draft a bill, and that the bill would be brought to the House floor for a vote on Monday.

Presumably the Congressional leaders now believe they have the votes to pass it.

If you read the mainstream media, you will learn that the bipartisan bailout effort was hampered by political bickering. This is politically acceptable code for the fact that the swindle was opposed by people taking firm, principled stands, on both left and right.

And that's why, to the extent that it was supported at all, the support for the bailout has been generated through the manipulation of fear, and fear, and more fear, and the dissemination of lies, and lies, and more lies.

Speaking of lies, how much does it matter that the firms about to be bailed out are under investigation by the FBI for securities fraud? None at all, apparently; and this is reality reversal at its finest. In normal cases of securities fraud, the government confiscates the ill-gotten gains from the criminals. But this time the criminals have been holding the entire country for ransom.

On a related point: I think I can clear up some of the confusion occasioned by Larisa Alexandrovna's article at Huffington Post, "Welcome to the final stages of the coup..." (which you should read, if you haven't already). In response to her plea to keep the government out of the market, she's been called a communist, a socialist, and a Russian, among other things. Larisa thinks these name-calling attacks have shown the ignorance of the people attacking her, since (as she says) she is not from Russia but from the Ukraine, she's not communist but pointedly anti-communist, and the position she espouses is not socialism or communism, but classic capitalism. Or at least it used to be.

On the other hand, these descriptions of Larisa could very well indicate that her critics know exactly what they're talking about.

Prior to 9/11 -- during the Cold War, for instance -- we were taught that communism was a system in which the government controlled the markets, and for this reason we strongly opposed not only communism but its close relative, socialism. And we were taught to despise and fear the Russians, whose major crime was having been forced to live under such a system.

Meanwhile, half a world away, Russians were taught that capitalism was a system in which the markets control the government. And since we could never deny that, we simply ignored it. We were taught (by example, if nothing else) not to mention capitalism; we call it "democracy" instead. And we were taught that in a democracy, the market was "free", meaning "free of government interference". That was never true, but it's what we were taught -- back in the day.

But that was then, this is now, and the lines have been blurred by decades of propaganda. Now George Bush is America, his policies are American, and anyone who dares to oppose them (from whatever viewpoint, for whatever reason) is anti-American.

And, thanks to our rich Cold War experiences, we have a number of synonyms for "anti-American". These include "communist", "socialist" and "Russian", as well as "liberal" and "leftist".

Not to put too fine a point on it, but: Reality is lost. Words no longer have any meaning.

So in the post-9/11 world there are only two possible political positions. If you're not "with Bush" then you're "with the terrorists", and that makes you "Russian", "communist", "socialist", "liberal", "leftist" and many other derogatory terms too -- all of which now mean exactly the same thing. 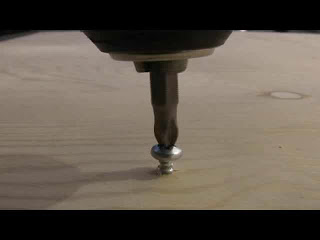 But there's no longer any need to be so divisive. Now, with this forced national purchase of "toxic waste", we can unite around a common bond once again.

Left or right; communist or capitalist; liberal or conservative; donkey or elephant or maybe even sentient being; if you look under the thick layer of toxic waste, you can see that we're all Americans again -- all proud owners of a national disaster.

Congratulations, America! We are now well and truly screwed.