Air Grenadist Cleared For Courthouse Performance, But No Date Set 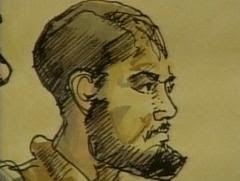 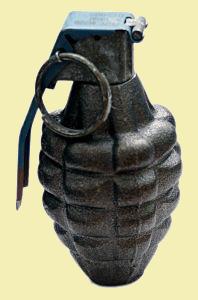 Derrick Shareef has been judged competent to stand trial. The so-called "air grenadist" of Rockford, Illinios, got caught up in an FBI entrapment operation, which culminated in a bogus weapons deal that went horribly wrong.

Derrick Shareef was arrested after trading a pair of stereo speakers for a box of nonfunctional grenades, a handgun and some blanks. According to FBI entrapment tapes, the undercover agent had talked Shareef into obtaining the grenades with the object of detonating them in garbage cans in the CherryVale Mall on the Friday before Christmas.

Shareef was clearly a dangerous terrorist, as the FBI's affidavit shows that the undercover agent drove Shareef around town, "helped" him pick the Mall as his target, "helped" him to choose grenades as a weapon, and "helped" him select the Friday before Christmas as his target date. Apparently Shareef came up with the "garbage cans" angle all by himself.

Fragmentation grenades are designed to be detonated in the open, where the thin steel casing becomes deadly shrapnel. Shareef's unique contribution to the terror plot was the idea of detonating the grenades in garbage cans. The cans would have directed the blast straight upward, while absorbing most of the shrapnel.

Shareef was led (along by the nose) by the undercover FBI man to make a martyrdom video, but he was no martyr. He was trying to figure out how to detonate the hand grenades and get out of there alive. But he may be in prison for the rest of his life.

He's charged under a law concerning weapons of mass destruction, which defines its terms in such a way that hand grenades certainly qualify.

And Derrick Shareef has already led authorities to Hassan Abujihaad, who had been wanted for many years for terrorism-related offenses, and whom the FBI for some unknown reason, simply couldn't find until Shareef told them where to look.

But that's far in the future. No trial date has yet been set.