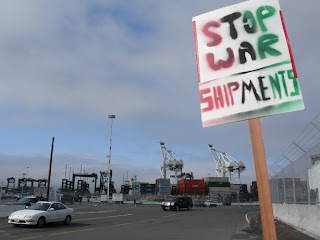 In Oakland, labor and peace groups managed to shut down -- at least for a while -- a small yet vital cog in the monstrous, bloated war machine. Here's a report from S F Bay dot Indy Media dot org:

On May 19th, work activity at the Stevedoring Services of America (SSA) gates was successfully halted [...] after the ILWU locals chose not to cross the community picket lines. Three ships sat at the SSA docks, and cargo did not move. Pickets continued.

The picket was a direct action to stop the war. Currently, military shipments through the port enable and support the ongoing occupation of Iraq. Through this picket, activists aimed to stop war shipments with the intention of forcing the immediate return of US troops. Moreover, picketers also demanded community control of the port, insisting that port money be used to fix schools and social services in Alameda County.

Seriously, a couple of tips of the frozen cap to the anonymous "a" who mentioned all this in the comments, and who kindly provided some additional information: 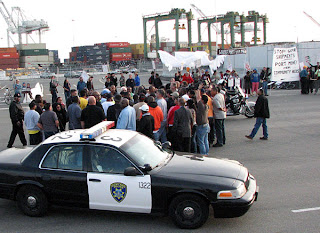 For the second time today, Longshoremen honored an anti-war community picket line at the SSA Terminal in the Port of Oakland. Three ships sat at the SSA docks, and cargo did not move.

Organizers accuse American President Lines (APL) and Stevedoring Services of America (SSA), which are both served by Eagle Marine Services, with war profiteering. Eagle Marine Services has a contract to run the Concord Naval Weapons Station which brings in $975 Million annually. Organizers also claim that the Port does $33 Billion in business a year, yet contributes nothing to local schools and social services.

Picket line organizer Jonathan Nack explained, “It's very important to understand that the union members knew they were risking losing their pay. Yet member after member told me that there is no way they that they would cross the picket line. These workers took a stand to end the war, and demand the Port give more money to fund local schools and social services. One worker told me, "twe have to stop this war. My family has children in the Oakland schools. If they think I'll cross this picket line they're crazy.””

The picket was called by the Port Action Committee, an ad hoc grouping of anti-war, labor, and community organizations. Port Action organized a rally on April 7th in front of the Port office building which commemorated the four year anniversary of the day Oakland police attacked non-violent anti-war protesters at the Port. (Oakland Tribune article) 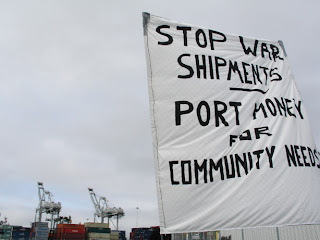 The Ports of Oakland have been shut down by a small group of antiwar protesters and organized workers.

Although union arbitrators did not “We did not succeed in winning the arbitration for them, what people saw today was a much more powerful demonstration of solidarity than we had a right to expect,” said Port Action Committee organizer Chris after Longshoremen agreed to walk off the job in honor of the picket.

“The IWU gave up. [longshoremen] gave up hundreds of dollars, time and a half [weekend pay] to respect our picket lines. You need to realize that the IWU stood by us. They didn't win the arbitration [so] each one of them is taking a personal loss to help us here today, to stand with us today.”

“I think the message is loud and clear,” said one union leader today at the port. “If longshoremen at the Port of Oakland can honor picket lines against the war in Iraq, then they can do that in other ports.” 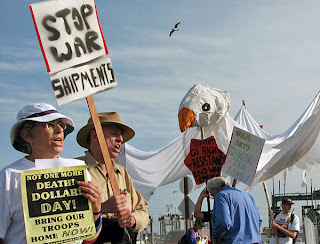 Longshoremen honored a community picket line this morning at the SSA Terminal in the Port of Oakland. Three ships are now sitting at the SSA docks, and cargo is NOT moving today. Our picket line will resume this evening to meet the next shift of dock workers.

Join this afternoon's picket line! We'll meet at the West Oakland BART station at 4 p.m. From there we'll shuttle to the SSA Terminal in the Port.

SSA (Stevedoring Services of America) has profited in an ugly way from the war in Iraq. And, it was at the gates of SSA that peaceful protesters were attacked by police on April 7, 2003. (Oakland Tribune article)

Pictures from Port of Oakland Picket

Audio and interviews from Port Picket Line
File under: protests
Email ThisBlogThis!Share to TwitterShare to FacebookShare to Pinterest
Posted by Winter Patriot