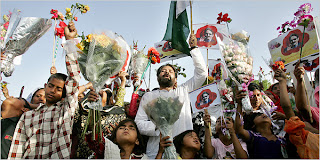 I've been writing about Pakistan as often as possible, watching General/President Pervez Musharraf's military-style "civilian government" come off the rails in slow-motion, as it were, and continually noticing parallels with a better-known military-style "civilian government" which is also doing a slow-motion derailment. Carlotta Gall's reports from Pakistan are catching a bit more interest now than they once did, and that's an important sign of which to be very wary, in my view.

ISLAMABAD, Pakistan, May 21 — After a series of political blunders in the last two months, Pakistan’s president, Gen. Pervez Musharraf, is being advised by his political supporters to make a dramatic change of course or risk losing power amid more chaos and bloodshed.

If you redact the identifying details, the story is almost very familiar one, isn't it?

After a series of political blunders in the last ______ months, ________ president, _______, is being advised by his political supporters to make a dramatic change of course or risk losing power amid more chaos and bloodshed.

Of course there are differences, too.

Members of the ruling party, the Pakistani Muslim League, who provide General Musharraf’s base of support in Parliament, say that nationwide protests since the suspension of the country’s chief justice in March, and violent clashes that left 42 people dead in Karachi on May 12, have cast a pall over his leadership.

They are encouraging General Musharraf to strike a compromise with the Supreme Court justice, who did not shy away from challenges to the government and whose removal has been protested as a threat to the judiciary.

Some party members have also recommended that General Musharraf open the elections for the presidency, which are supposed to take place this year, to his exiled political opponents and that he make sure that the polling is free and fair.

The alternative to compromise, party members warn, is a hard-line military solution that leads only to greater confrontation.

For the moment, General Musharraf seems to be sticking to his planned course to maintain power rather than seek conciliation with either the chief justice, Iftikhar Mohammad Chaudhry, or his political rivals, supporters and opponents say.

Last week the president repeated his insistence that there would be no deal to bring home either of the opposition leaders, Benazir Bhutto and Nawaz Sharif, who left the country under a cloud of corruption allegations.

He's got enough trouble already with the political opponents who are in the country:

A number of party members say they intend to push their case. Opposition members and some from the ruling party warn that not only is General Musharraf’s future at stake, but also the stability of the country, which sits on the front line of American efforts to combat Taliban insurgents and Al Qaeda.

“There are two ways he can go: retreat to the bunker or stop, pause, review, reflect and reverse course,” said one ruling party member who did not want to be identified. “He has to show leadership, magnanimity, and be loyal to the broader objective. The important thing is Pakistan’s future.”

That may be the important thing to some people, but not all, clearly...

Not least, the ruling party members, who also face elections this year, have become concerned for their own political fortunes. They acknowledged that both the president and the party have suffered from the public reaction to the chief justice’s removal, which many concede the president did not anticipate.

NO! Nobody anticipated the public reaction!!

But you see, in _____, where the government has been visibly implementing a very evil agenda, the public reaction is just what the __________ president anticipated: 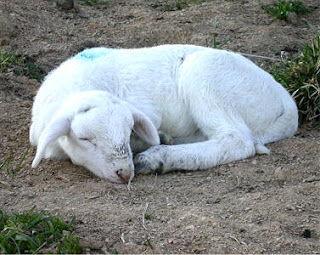 As we've mentioned, official ______ reaction to Pakistan's plight is of interest:

Asked about General Musharraf’s growing troubles, a senior _____ official reiterated _____ support for the Pakistani president. “Fundamentally the direction of the country is right,” the official said. “There is more pressure on extremists. They are moving in the direction of elections.” The case of the Supreme Court justice, he added, “needs to be handled as a judicial matter, and resolved in that way.”

Other ______ officials say that _________ has treated General Musharraf with tremendous care in the past year, saying little about democracy, and taking no position on such questions as whether he should give up his military post and run as a civilian, a source of deep controversy here.

“There is such concern about what a post-Musharraf Pakistan would look like,” said one ______ official, “that the overwhelming reflex is to do nothing that destabilizes the situation.”

Analysts warn that another misstep by the president, or a resort to more autocratic measures, such as declaring a state of emergency, could itself be disastrous and risk even more violence. Still, many fear the president will be tempted to dig in.