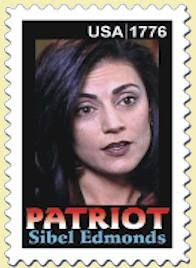 Here's Luke Ryland, from his latest post at Wot Is It Good 4:

Henry Waxman's House Government Oversight Committee has been doing great work lately with various hearings and investigations, and some have argued that we shouldn't pressure Waxman on Sibel's case given that he undoubtedly has a full schedule. I have a two-fold response:

a) We are simply asking that Waxman announce that he will have hearings, we can argue about the timing later.

b) All of the background work on this case has been completed. Sibel's claims have already been investigated, and confirmed, by a number of other bodies - Congress, FBI, Department of Justice.

Of course, given the nature of Sibel's work as a translator, all of her claims are easily verified by the source material that she translated. As she says in Kill The Messenger:

It was Whistleblower Week in DC last week - and Sibel's case highlights a number of important issues regarding whistleblowers. Not only do we have the dereliction of Congress and the media, but also the chilling effect on other whistleblowers, and more importantly, whistleblowing.

As Sibel says in a new interview:

"What kind of example is my case presenting to those other people who may want to do the right thing and come forward? They would say it doesn’t make a difference at the end, because I pursued every channel possible. I went as high as I could go with the courts, including the Supreme Court, and as you know, they issued a gag order on me several times and invoked the State Secrets Privilege... I’m prevented from discussing whether or not I’m right. And I went all the way to Congress, I did the right thing. I was not what they call a “leaker” who goes straight to the media and starts divulging classified documents. I went to the appropriate committees, the Judiciary Committee and the Intelligence Committee, too, by the way, and the House and Senate... I went through the other legitimate channels — the courts, the Inspector General’s Office, which is the executive branch. I tried the media. So I don’t blame those people that get pessimistic and say it doesn’t make a difference, or think they’ll lose their job or possibly go to jail. "

Think about that. Even if you don't know anything about Sibel's case (there's a primer here), I urge you to call Waxman's office and demand public hearings into her case because if Sibel can't get hearings into her case, why would anyone with incriminating evidence step forward to assist Waxman, or anyone else, with any of his other hearings?

As Sibel said in the same interview:

"They make an example out of you. Because if one case, let’s say my case, would really bring justice and accountability, you would see so many people doing the same thing. And how many times — let’s just look at the past decade — have you seen a legitimate whistleblower from any of these agencies come forward and prevail? I don’t think you can name one case."

Again, if you have hope in Waxman and in the investigations that he will hold (as many of us do), I urge you to call his office and demand public hearings into Sibel Edmonds' case - if only because it will help facilitate investigations into the things that you most care about.

For whistleblowers, there are 'knowns' and 'unknowns' - the 'knowns' include the fact that you will be retaliated against, lose your job, and probably your career, and often your family and your home. The 'unknowns' include whether there will be any upside, any accountability, any justice, to mitigate against the known, guaranteed, downside.

How can we ask potential whistleblowers to stand up and be 'patriotic' and disclose wrong-doing if people like Sibel Edmonds, with documented proof of corruption, espionage, and treason by high-level US officials, validated by multiple investigations by Congress, FBI & DoJ, can't get any resolution or accountability?

"So you have this case which for the past five years has been confirmed by Congressional sources, and people familiar with my case, and the Department of Justice’s Inspector General’s Office, and has never been contradicted or denied by the Justice Department or the FBI, and still nothing has been done.

There has been no hearing and nobody has been held accountable. We are basically where we started and I find that really appalling."

Seriously, if we don't stand up for Sibel, and demand public hearings and accountability into her case, then we can't reasonably expect anyone with incriminating evidence to come forward regarding Waxman's other investigations - the Global Warming propaganda, the Niger caper, the Plame Wilson caper, war profiteering etc.

We'll have more from Luke and Sibel later in the week, but for now: Please make Waxman's phone ring ... and ring and ring and ring!
File under: Henry Waxman, intelligence, Luke Ryland, oversight, Sibel Edmonds, Valerie Plame
Email ThisBlogThis!Share to TwitterShare to FacebookShare to Pinterest
Posted by Winter Patriot