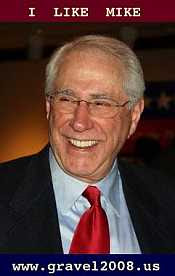 Tomorrow morning at 9:30, at the National Press Club in Washington, former Senator Mike Gravel will introduce his plan to force an end to the war in Iraq.

According to the press release, Senator Gravel will also present

a very tough legislative strategy to close out the war by Labor Day and have American troops home by Christmas. The only requirement is congressional leadership.

Unfortunately, the "only requirement" could be extremely problematic, as most high-powered Democrats support the Iraq war, just as they support all American wars of conquest and plunder.

The former Senator and current candidate for the Democratic presidential nomination plans to say:

The Congress must stop acting alone on the war issue and bring the American People into the fray to adjudicate the constitutional confrontation between the Congress and the President, if we are to end the mess Bush created before January 2009.

Constitutionally the Congress is the superior power. The President can only enforce the law and obey it like any other citizen. Congressional timidity over the years encouraged by political partisanship has unleashed an imperial presidency. When the presidency falls into the hands of a messianic true-believer like Bush the result is a morally questionable foreign policy and a domestic disaster threatening the nation's safety.

In the face of a President oblivious to human suffering and death, the voting public is the only power that can stop the war. The Congress can and must energize this citizen's power. Timidity, compromise, comity and politics as usual are not viable alternatives to LEADERSHIP when Americans and Iraqis are dying every day.

The Gravel Plan requires the congressional leadership to

draw-out over days and weeks, if necessary, repeated daily cloture votes in the Senate and repeated daily veto override votes in both chambers to give American voters time to weigh-in and force two-thirds of their Senators and Representatives to vote to override the President's veto of the American will.

It will be very interesting to see what transpires. How much media coverage will the press conference get? How much vitriol will be thrown at the Senator and his supporters? Will the American people speak up and tell their "elected" "representatives" what they want? And will the Congress respond?

Or do we have to impeach all of them?
File under: impeachment, Iraq, Mike Gravel
Email ThisBlogThis!Share to TwitterShare to FacebookShare to Pinterest
Posted by Winter Patriot