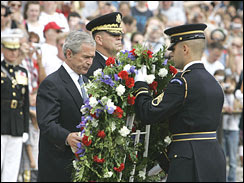 Another Memorial Day, another wreath, another steaming pile of equine fecal matter, and another barbecue. The CBS headline told the whole sorry tale:

How could the sun have shone?

[...] after laying a wreath at the Tomb of the Unknowns and meeting privately at the White House with the families of some fallen servicemen and women, Mr. Bush called the wars in Iraq and Afghanistan a part of the nation's destiny.

Yes, indeed. Our foreign policy has long been based on a thoroughly shameful and lunatic idea of endless national expansion called "manifest destiny" -- not just a garden-variety lunatic idea but one which has brought America and indeed the whole of humanity to the very brink of ruin.

And this is our destiny!! Happy Memorial Day!!

He said they follow a rich tradition of similar American sacrifices throughout this country's history.

Rich? That's a great choice of words; we do have a very long tradition whereby thousands of poor Americans and millions of ever poorer foreigners are sacrificed so that a relatively few families of merciless scoundrels can get even richer! And we are so conditioned to absorb the lies along with the loss that we usually feel more grief than anger.

Meanwhile, on the other side of the bogus war,

violence continued in Iraq where a suicide car bomber struck a busy commercial district in central Baghdad, killing at least 21 people and damaging a shrine revered by Sunnis and Shiites alike.

Speaking of the more than 368,000 buried through history at Arlington National Cemetery, Mr. Bush said, "Nothing said today will ease your pain. But each of you needs to know our country thanks you and we embrace you and we will never forget the terrible loss you have suffered."

Not "never". "Never" is a very long time. We can't really be sure about anything forever! But we can be fairly sure that Bush managed to remember the terrible loss that other people have suffered while he and his buddies have accumulated mind-numbing wealth and power -- we can be sure that George Bush managed to remember -- what where we talking about? -- at least until he reached the end of the quoted sentence. Or maybe at least almost half that long.

In his speech, Mr. Bush said the freedoms that people enjoy in this country today "came at a great cost and they will survive only so long as there are those who are willing to protect them."

As happens so often with this miserable failure, he's got it only partway right. The freedoms that people enjoy in this country today came at a great cost and they survived only as long as the American people were willing -- and able -- to protect them from their government.

"They know that one day this war will end, as all wars do. Our duty is to make sure this war was worth the sacrifice" and that the fighting men and women succeeded — and "where tyrants and terrorists are frustrated and foiled ... where our nation is more secure from attack."

Is this insanity or deliberate propaganda? Either way it makes no sense to any astute observer. The only way Bush will consider the "sacrifice" "worthwhile" is if it leads him to the greatest pot of Texas Tea in the land.

As long as our entire electoral system -- from campaign finance law to media coverage to rigged elections -- is thoroughly dysfunctional, he is probably right. Our destiny is to be ruled by others whose agenda differs significantly from our own.

"On this day of memory, we mourn brave citizens who laid their lives down for our freedom," he said. "May we always honor them, may we always embrace them and may we always be faithful to who they were and what they fought for."

It's enough to elicit a sick laugh. This miserable little man could not possibly be less careful -- or more ironic! "Always" is right up there with "Never" on the list of dangerous words to say. And the president has never shown any sense of honor, for himself or for the troops, yet he asks us to honor them always. And people still gobble this stuff up?

Do you like the way we sacrifice our lives -- and the future of our nation's economy -- so a few of the president's richest supporters can guarantee themselves virtually limitless wealth? That's the freedom they're always talking about -- not our freedom; our freedoms are still being taken away. Do you like that, too?