In Memoriam: Must Be Close To A Million By Now 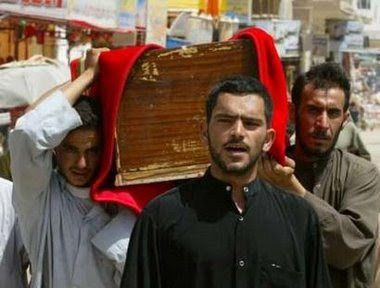 ... funeral for a victim of Tuesday's bomb in Najaf... at least 25 people were killed and 60 wounded when a car bomb exploded near a popular market in Amil district in southwestern Baghdad... 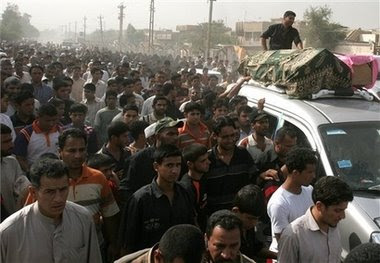 Iraqi people follow coffins on cars during funeral procession of a number of students killed on Tuesday in Waziriya by gunmen, at the city of Sadr, northern Baghdad, Iraq... 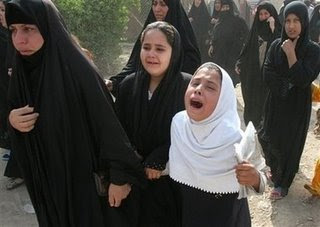 Iraqi children and women mourn during a funeral procession for a number of students killed on Tuesday in Waziriya by gunmen, at the city of Sadr, northern Baghdad...

The death toll in the monstrously Orwellian "Global War On Terror" must be close to a million by now ... unless it's well past that horrific mark already. And this only includes unnecessary deaths; it doesn't count the millions whose homes have been destroyed; more millions leaving everything behind and fleeing from the bombing; tens of thousands -- most of them completely innocent -- held prisoner in utterly deplorable conditions. Lost, maybe forever; dead, but not really; still suffering, still mourned -- how can you count this?

How can anyone look at all this without asking: All this for what?

And how long will take us to figure out how to stop it?

Have a nice picnic.
File under: GWOT, Iraq
Email ThisBlogThis!Share to TwitterShare to FacebookShare to Pinterest
Posted by Winter Patriot