Craig Murray: The End Of Liberty 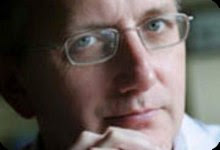 Nobody here has had anything to say about the police-state power-grab unveiled most recently in the UK, and that's ok with me. Or perhaps I should rephrase: the lack of comments is not nearly as troubling as the plan to give the police more powers -- powers they haven't even asked for!

But it didn't get past Craig Murray, whose most recent item at Atlantic Free Press is called "The End of Liberty". The former UK ambassador writes:

I am in general opposed to violence, except as a last resort. And I know that the police are not all fascists. Many policemen don't like the drive against civil liberties any more than I do. But, even granted that they are only doing their job, I can promise you this. The first policeman who stops me as I am peacefully going about my lawful business, and demands to know who I am and where I am going, will get punched on the nose.

As the government whittles away our basic freedoms, there comes a point where you either resist, physically, or we all lose our liberty. I think Reid and Blair's new proposal for a police power to "Stop and question" takes us to that point.

Of course, having skin of a regulation Scottish blue colour, I am not likely to be stopped. Jean Charles De Menezes was killed for having a slightly olive complexion and dark hair, and it is people of his hue and darker who will in fact be stopped and questioned.

The proposal is obvious madness - if the government was looking to provoke young British Muslims, no tactic would work better. Which does lead us, quite seriously, to be forced to question whether Reid and Blair are trying deliberately to cause an even further deterioration in community relations. There are two possibilities: either they are trying to provoke more "Islamic" violence, or they are very stupid.

Come to think of it, there is a third possibility. They may be trying to provoke more Islamic violence, and be very stupid.

And thanks once again to Craig Murray, who appears to be way too honest for the Foreign Service.
File under: Craig Murray, police powers, Tony Blair
Email ThisBlogThis!Share to TwitterShare to FacebookShare to Pinterest
Posted by Winter Patriot