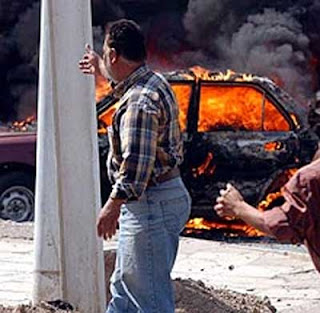 An Iraqi who asked not to be identified ha[s] disclosed some of the US activities such as assassinations and bombings in markets that aim at sparking sectarian fighting among Iraqis so as to facilitate the partition of the country.

He pointed out that he that he worked with the US occupation troops for about two and a half years and then was able to flee from them to an area outside Baghdad where, he hopes, the Americans will not be able to get to him.

According to an article from the Association of Muslim Scholars in Iraq (AMSI), posted at Uruknet dot info,

"The American occupation forces put me in charge [...] of a unit that carried out assassinations in the streets of Baghdad," he said.

"Our task was to carry out assassinations of individuals. The US occupation army would supply us with their names, pictures, and maps of their daily movements to and from their place of residence [...]"

"Anyone in the unit who made a mistake was killed. Three members of my team were killed by US occupation forces after they failed to assassinate Sunni political figures in Baghdad. A US force that had been so-ordered eliminated them. That took place two years ago," the former collaborator recalled.

The former collaborator said that the Americans have a unit for "dirty jobs." That unit is a mix of Iraqis, Americans, and foreigners and of the security detachments that are deployed in Baghdad and other Iraqi cities. This unit doesn’t only carry out assassinations, but some of them specialize in planting bombs and car bombs in neighborhoods and markets. This unit carries out operations in which wanted people whom the American army does not want killed are arrested.

The former collaborator said that "operations of planting car bombs and blowing up explosives in markets are carried out in various ways, the best-known and most famous among the US troops is placing a bomb inside cars as they are being searched at checkpoints. Another way is to put bombs in the cars during interrogations. After the desired person is summoned to one of the US bases, a bomb is place in his car and he is asked to drive to a police station or a marke[t] for some purpose and there his car blows up."

The testimony of the former collaborator is consistent with some western reports that have disclosed the involvement of US military personnel in bombings that target Iraqi civilians.

Yep. It's absolutely consistent with many other reports we have seen over the past four years.

The Americans kill and torture, they set up death squads, they bomb civilians, and then their leaders have the gall to tell the Iraqi leaders, "We're running out of patience!"

It's almost enough to take my words away.

But not quite.
File under: Iraq
Email ThisBlogThis!Share to TwitterShare to FacebookShare to Pinterest
Posted by Winter Patriot