Mercy And Dignity For Unarmed Noncombatants? You Must Be Joking! 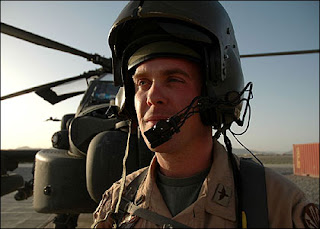 A new Pentagon survey of troops in Iraq found that only 40% of Marines and 55% of Army soldiers would report a member of their unit for killing or wounding an innocent civilian.

For a more realistic percentage, we might compare the number of innocent civilians killed or wounded with the number of cases in which one member of a unit has reported another.

You see what I mean?

In the first internal military study of battlefield ethics in Iraq, officials said Friday they also found that only a third of Marines and roughly half of soldiers said they believed that non-combatants should be treated with dignity.

Let's slow down and get this straight: Two out of every three Marines, and one out of every two soldiers, can't even be bothered to pretend they think non-combatants should be treated with dignity.

Actually, the propaganda does stink, but it's much better than the reality. Chris Floyd has recently written two enormous posts showing how we're bringing the enlightened concept of "No Mercy" to Afghanistan. Excerpts from both posts follow:

Britain's arch-conservative Sunday Telegraph continues to be a source of some of the most revealing reports about George W. Bush's "War on Terror." In its unquenchably pro-war pages, where the news section is just as skewed as the reliably rabid editorials, the ST regularly -- albeit inadvertently -- gives us a glimpse of the true face of the Terror War behind the painted masks of piety worn in Washington and London.
...

The burden of the piece is this: British forces in the hotly disputed Helmand province were not "ruthless enough in finishing off their targets" when going after the Taliban. They too often refrained from instant, massive retaliation in fear of killing civilians. But now the Americans have come down to show them how it's done, with the "uncompromising use of air power" and orders to "show no mercy" against suspected Taliban fighters. The centerpiece of the story is an attack by Apache helicopter gunships on a boatload of men crossing a Helmand river. Even though the copter crew "didn't have hostile intent or a positive ID from the ground commander," Special Ops told them "that although they could not themselves see the men on the boat, they must be the Taliban who had [earlier] attacked them." And so the Apaches swung in low and opened up with 30mm cannons on the Afghans, who had by this time scrambled to shore.

1st Lt. Jack Denton, 26 [photo], described it for the Telegraph: "You can see the person but you can't see the features of his face. The 30mm explode when they hit and kick up smoke and dust. You just see a big dust cloud where the person used to be." One particular dust cloud caught Lt. Denton's attention:

As the helicopters came in to attack, Lt Denton said, one of the men turned to face him and dropped to his knees. "I think he knew that there was no hope," he said. "He was making his peace."

Spiritual degradation [...] has permeated the minds of ordinary soldiers carrying out their ordinary duties -- if anything can said to be "ordinary" about Bush's intervention in Afghanistan's long-running civil war on the side of a coalition of war criminals, drug barons, warlords and woman-hating religious fanatics, that is. Witness the Telegraph story's closing words, from young Lt. Denton. The passage is obviously meant to be a bit of gung-ho G.I. bravado of World War II vintage, the kind of line you might hear in an old movie from a cheerful, apple-cheeked, tough-guy-with-a-heart-of-gold dogface played by, say, Ronald Reagan:

But for now, the American airmen are not losing any sleep over [the threat of being shot down]. "When you are on top of the enemy you look, shoot and it's, 'You die, you die, you die'," Lt Denton said. "The odds are on our side. I really enjoy it. I told my wife, if I could come home every night then this would be the perfect job."

Because the Terror War has no deeper meaning -- no real purpose beyond loot and power for a few -- it devalues and degrades everything it touches. To kill a human being is nothing more than stirring up a bit of dust; it's easy -- "the odds are on our side" -- it's fun, "I really enjoy it."

May 4, 2007:
The "No Mercy" Doctrine Strikes Again in Afghanistan

This week, we saw yet another example of the uncompromising aggression ordered by the Bush Administration in the supposedly liberated land: dozens of civilians killed in an American air attack on three rural villages in Herat province. The bodies of at least 45 civilians -- including a large number of women and children under 10 -- have already been recovered, with more to come, say officials of the Bush-backed Afghan government. Several other women and children apparently drowned in a nearby river as they fled the massive air assault, which destroyed more than 100 houses and left more than 1,600 people homeless, as the New York Times' Abdul Wafa and Carlotta Gall report:

A provincial council member from Herat, Naik Muhammad Eshaq, who went to the area independently, said he had visited the three bombing sites and produced a list of 50 people who had died, including infants and other children under age 10. People were still digging bodies out of the rubble of their mud-walled homes on Tuesday afternoon, he said...

[Farzana Ahmadi, a spokeswoman for the governor of Herat Province,] said all 42 dead counted by the government delegation were civilians. She said the government was continuing its investigation to see if enemy fighters had also been killed.

Eshaq, the council member, said villagers were adamant that there had been no Taliban fighters in the area. "I could not find any military men," he said.

"So far the people have buried 45 bodies, and they are still taking out more," said Ghulam Nabi Hakak, the Herat representative of the Afghanistan Independent Human Rights Commission, reached by telephone Wednesday night. "Yesterday they buried 12 children. They told us some women and children ran away and got lost and drowned. The exact number of dead is not clear, but the people are very angry."

Angry is right; thousands of people in the area have come out to protest the massacre in Herat. In addition, hundreds in Nangahar province mounted vociferous protests "accusing U.S.-led forces of killing six civilians, including a woman and child, during a counterinsurgency raid," Constable reports. Even Afghan President Hamid Karzai, the photgenic ex-oil executive whom Bush installed as leader of the "sovereign" Afghan government, spoke out strongly against the killings -- although, perhaps mindful of the true provenance of his limited power, his lament was more in sorrow than in anger, as the [Post] noted:

"The intention may be very good to fight terrorism, sometimes mistakes are made, but five years on, it is very difficult for us to continue to accept civilian casualties," Karzai said. "It's not understandable anymore....We are very sorry when the international coalition force and NATO soldiers lose their lives or are injured. It pains us. But Afghans are human beings, too."

That's where the resplendent satrap is wrong, of course; Afghans are not fully fledged human beings -- at least not in the eyes of those waging the Terror War. Neither the wielders of disproportionate state power nor the "asymmetrical" resistance they spawn with their sledgehammer tactics consider those whom they slaughter to be real human beings. They are just counters in a grand geopolitical game for loot and dominion: cannon fodder, kafirs, collateral damage. There is simply no recognition -- even among the Ivy-educated elite, inheritors of centuries of civilization and enlightenment -- that those who stand in their way, or get ground up in their schemes, are individuals every bit as worthy of life as nice white folks with big bank accounts. No recognition that these faceless victims -- killed from afar, killed from on high -- feel the loss of their loved ones, the destruction of their homes, the ruination of their lives just as deeply and intensely as "normal" people in America or England do.

And so the "uncompromising" application of merciless force will go on, in Afghanistan, Iraq and Somalia, and in lands still waiting for the Terror War's touch.

UPDATE: Investigator Sarah Meyer has more on the earlier civilian killings at Nangahar, which have also sparked mass protests, plus more much more in-depth research on the war in Afghanistan, which is growing worse -- more than five years after the "defeat" of the Taliban. You can find it all here: Index on Afghanistan.

The question is clear:

Can we go home now?

The answer is clear too.

Not until all the oil and gas run out.
File under: Afghanistan, airstrike, Chris Floyd, propaganda
Email ThisBlogThis!Share to TwitterShare to FacebookShare to Pinterest
Posted by Winter Patriot