Bring Back Freedom Fries: France Rejoins The Axis Of Evil 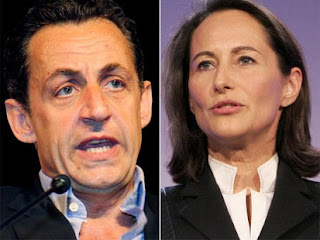 "Results" from the French presidential "election" are in and once again the Fascist takeover of Paris has been bloodless.

ABC News got the headline just about right with "Pro-U.S. Candidate Wins French Presidency", but they fell into the mud with the sub-head: "Conservative Nicolas Sarkozy Triumphs over Socialist Challenger" Note the tone of the opening few paragraphs:

Tonight Nicolas Sarkozy's "motorcade" looked more pop star than presidential. With the results just in announcing him the winner of the France's toughly-contested run-off for president, Sarkozy took a victory lap around Paris. The paparazzi did their best to keep up.

Sarkozy's route took him past the Arc de Triomphe and up the Champs-Elysees, right past the Elysee Palace, France's White House, where he will take up residence in 10 days time. All the while, scooters and motorcycles gave chase carrying France's famously aggressive photographers.

Without saying anything blatantly rude, David Wright manages to evoke Pythonesque revulsion: So the victors celebrated like cheese-eating pig-dogs? What else did we expect? We wave our private parts in their general direction!

But it comes as no surprise that Wright veers off in a different direction, landing in the mud again, stuck singing the lines we've come to expect of our so-called "mainstream" media.

Sarkozy's commanding victory is a strong mandate for change. The central theme of his campaign was "la rupture" -- a clean break with the past.

He is vowing to shake things up here.

Aha! So this is the new standard, apparently.

If you're a imperialist warmonger with globalist or tyrannical tendencies, the so-called news media are happy to call you a conservative, in which case 51% is considered a solid victory. And 53% is a landslide -- a solid mandate for radical change, or, if the incumbent wins, an "accountability moment" bestowing "political capital" on the winner.

It doesn't matter if the "election" is completely unverifiable, run on hackable machines which favor one candidate over the other, and it doesn't matter if the "final result" cannot be confirmed in any way. The reported numbers are sufficient, and the mandate for radical change is empowered, and that's the way it is, in bushzarro world, where people shall not have the power to influence their very own futures, especially if they happen to live in a democracy.

And that's why it was ok that the media coverage of the campaign was one-sidedly ruthless, with the so-called news media sharing every trivial detail of Ségolène Royal's allegedly private life, while refusing to report anything about Sarkozy's personal life, which appears to be in shambles!

If all this reminds you of John Kerry, the supposedly opposition candidate who tried to outflank Bush on the right[!] while being ripped mercilessly for his service service in combat, while W got a free pass after apparently going AWOL from the National Guard, then you may understand French better than you think.

And as you've probably guessed by now, this Sarkozy fellow is dangerous:

Sarkozy has dreamt his whole life of this moment. A former interior minister under French President Jacques Chirac, Sarkozy has long held ambitions to lead his country. He may be short in stature -- about the size of Napoleon Bonaparte -- but he is known here as a tough leader, a force to be reckoned with.

And guess what? His opponent was dangerous too, what we might call a "right-of-center socialist" -- something like Hillary Clinton with good hair, if you get my drift. Roundly supported by people whose interests she apparently has no interest in serving, purportedly reviled by those who share her beliefs to a remarkable and frightening extent, and yada yada...

So for all intents and purposes, even though this is a very damaging loss, and even though it reeks of a fish-market, the general drift of France toward tyranny was established long before the French "electoral process" produced the final pair of presidential "candidates".

Very sad, but apparently quite true, my friends.

And the average French voters have no idea what's hit them.

Most of them probably don't even know that they've been hit!
File under: France, Hillary Clinton, Nicolas Sarkozy
Email ThisBlogThis!Share to TwitterShare to FacebookShare to Pinterest
Posted by Winter Patriot