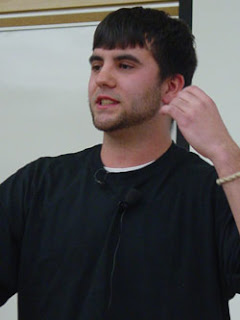 Darrell Anderson served seven months in Iraq before he decided he couldn't go back.

At one point, he and a group of soldiers were stationed in front of a roadblock near an Iraqi police station. For several hours they sustained enemy fire. Several soldiers had died. Then, for a while, it was calm. Suddenly a car drove toward Anderson's position. It had broken what soldiers call a "safety perimeter." Also the car was emmitting sparks, probably from bad brakes. Protocol in that situation is to shoot first and ask questions later, which is what Anderson's fellow soldiers were yelling for him to do.

Anderson held his fire. He had assumed the driver was confused, that he was trying to flee the city. He guessed right. Before the car sped away Anderson could make out two children sitting in the back seat. A boy and a girl, he thinks.

"Why didn't you shoot?" some of the other soldiers asked him. "Next time you shoot," they ordered.

"They got their procedures," says Anderson. "Even if it is a family, you're supposed to open fire, cause they broke the safety perimeter."

Anderson has another combat memory he can't shake. A hot, Baghdad morning. There had been reports of people with RPG's [Rocket Propelled Grenades], he recalls. "They sent us out to confirm this, which basically means they were out there waiting for us." To investigate the reports, Anderson and about four or five other soldiers boarded a Howitzer tank. Several guys, including one of his best friends, were leaning out of the tank's portholes, guns in hand. Anderson and the rest of team sat inside, across from each other, eyes closed, "just calmly getting ready for what's about to happen."

The attack came suddenly. The deafening rally of machine gun fire drowned out all other sounds. "The next thing I know," Anderson recalls, "my buddy's falling, and he falls on to of me, 'cause I'm sitting down, and he's bloody, and he's spitting up blood thinking he's going to die. He's asking us if he's going to die."

"I turn it to fire, I point again, and it's a little kid, 14 years old. He's running for his life scared," says Anderson. "Just like me and my fellow soldiers."

Anderson looked around. Everyone was scared. No one wanted to take his friend's vacated spot atop the vehicle. So Anderson took it upon himself, moved into the porthole position. "I go up there, and I'm thinking, 'right, we're under attack. Shoot somebody!'"

Anderson lifted his gun, aimed, pulled the trigger. Nothing. He'd forgotten to switch the safety to off.

Again, if he'd followed procedure, he would have shot. In a firefight situation, procedure and training dictate that if you're shot at, you fire at anyone around. They're not innocent anymore, Anderson was told. If they're standing there when someone's done this crime against you, they're guilty.

"I joined the Army to serve my country," says Anderson. "I joined knowing there's a fact that we could fight wars. But the war in Iraq is an illegal war. There's no reason for these kids to be over there doing this, and thousands of innocent Iraqis are being killed.

"I started thinking about the insurgency they're fighting. And I remember seeing their faces and I remember being in combat against them. These were just regular people, there were elderly men, young men. And then I remember looking around Baghdad and seeing the blown up buildings, the people on crutches, the dismembered people, and thinking that these are just their family members. If someone blew up your house and killed a couple of your family, you're going to pick up a weapon and you're going to fight a war for it."

In the video below, he talks about why he left the Army after serving in Iraq, and what we have to do in order to get the war stopped.

Sounds like a good idea to me!
File under: 9/11, Darrell Anderson, Iraq
Email ThisBlogThis!Share to TwitterShare to FacebookShare to Pinterest
Posted by Winter Patriot