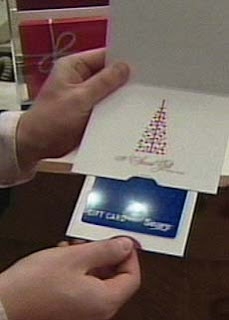 I can still remember how puzzled I was when I received my first Gift Certificate. I nodded and smiled at the explanation I was offered, but somehow I couldn't quite accept the notion that this paper in my hand was "just as good as money", with the obvious exception that it could only be spent in one place.

When I was a teenager, aunts and uncles would say "We didn't know what to get you, so we bought you a gift certificate so you could choose for yourself!"

I'd hold my tongue rather than asking the obvious question: "If you knew you didn't know what I wanted, then what made you think you knew where I would want to get it?"

"It's just as good as money," they would say, and I would somehow restrain myself from adding, "But it lacks the thing that makes money useful!"

And even though I could see as a young child that gift certificates were stupid, their attraction has grown ever stronger, and now you can buy an electronically encoded Gift Card from almost anywhere.

But why would you?

In Canada, a major media report is actually informing its readers that cash makes a better gift than a gift card.

The Consumers' Association of Canada is recommending that shoppers give cash instead of buying gift cards, which often go unused or come with many restrictions for their recipients.

"We recommend you forget about it completely and use cash," CAC spokesman Bruce Cran said.

One recent study in the United States reaffirmed other reports that consumers are losing out to retailers, estimating that 25 per cent of all gift cards go unused. Best Buy Co., for example, reported a profit of $43 million US from unused cards last year. Limited Brands Inc. recorded $30 million US in 2005 revenue because of unredeemed cards.

Why give big retailers all that free money?

Don't think, "We didn't know what you wanted but we knew where you'd buy it".

Think, "We wanted you to be able to choose where to spend this!"

Canadians spent $1.8 billion on gift cards in 2006, and the amount is forecast to exceed $3 billion this year.

What's wrong in Canada? Are their brains all frozen?

Unexpected expiry dates? Restrictions? Administrative fees? Beautiful! This is all much more complicated -- and apparently much more lucrative -- than the old-fashioned gift certificate scam which I found so appalling as a kid.

So smarten up out there, will ya?

Thanks to those who do, and a very Merry Christmas to all my friends and readers -- indeed to all sentient beings!

... and to all your friends and relatives, too, of course!
Filed under: Canada, Christmas
by Winter Patriot on 1:22:00 AM
Newer Post Older Post Home