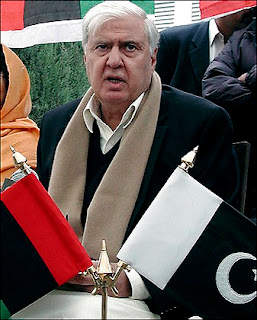 An apparent suicide bomb attack today in Pakistan has killed at least 50 people but left the apparent target, politician Aftab Sherpao [photo], unharmed. The explosion occurred in a mosque on the compound of the former Interior Minister, and injured at least 80 others who were observing the Eid holiday.

Aftab Sherpao has been Pakistan's chief law enforcement official under President Musharraf, and is running for Parliament in the January 8 elections. He survived another apparent assassination attempt earlier this year.

As David Rhode reported for the New York Times:

"It was a massacre," Mr. Sherpao said, his voice shaking with anger. "I can tell you that." 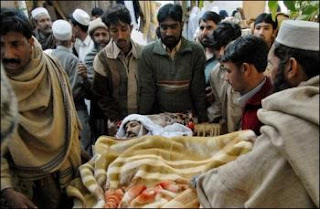 Independent Pakistani television stations showed images of blood-spattered prayer caps and clothes scattered across a white marble courtyard outside the mosque. Trails of scarlet blood marked where the injured were dragged from the building. Dozens of pairs of shoes – those of the dead and wounded -- lay abandoned.

The mosque, a modest white structure, was in the former minister's family compound in his ancestral village of Sherpao. A local police official estimated that hundreds of people were inside the mosque at the time of the attack, celebrating the holiday with him. The number of dead was expected to rise through the day.

In an interview on a local Pakistani television station, Farman Ali, a local government official, expressed "shock" that better security arrangements were not made during Mr. Sherpao's visit.

Riaz Khan of the AP had more details on the bomb and the security, via the Washington Post:

The bomb contained between 13-17 pounds of explosives and was filled with nails and ball bearings to maximize casualties, said the head of the bomb unit at the scene, who declined to give his name.
...

Iqbal Hussain, a police officer in charge of security at the mosque, said all those who entered had been made to pass through a body scanner and were searched with metal and explosive detectors.

Hamid Nawaz, the current interior minister, maintained there was no security lapse.

"All possible care had been taken, there was no lapse as such ... but such an incident can happen at such a gathering," Nawaz said on Aaj TV. 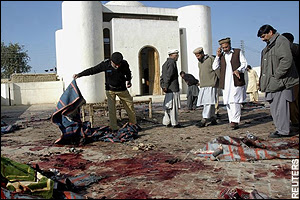 Bloodied clothes, hats, shoes and pieces of flesh were strewn about the building. Witnesses said the dead included police officers guarding Sherpao, who was praying in the mosque's front row at the time but not injured.

"We were saying prayers when this huge explosion occurred," said Shaukat Ali, a 26-year-old survivor of the blast whose white cloak and pants were torn and spattered with blood.

The bomber was praying in a row of worshippers when he detonated the explosive, provincial police chief Sharif Virk said. Hundreds of people were in or around the mosque, about 40 yards from Sherpao's house, witnesses said.

District mayor Farman Ali Khan said between 50 and 55 people were killed, and authorities were collecting information on their identities. Local police chief Feroz Shah said over 100 were wounded. 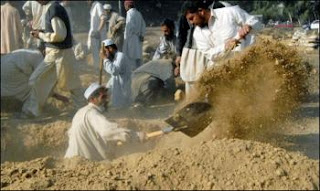 The hospital in Peshawar was wracked with chaos as the injured arrived in pickup trucks, ambulance sirens wailed and the wounded screamed for help.
...

A bulldozer was brought in to dig graves for the dead next to the mosque. Other volunteers used shovels.