Overpowered: How Rashid Rauf Got Away 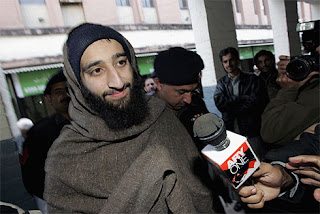 Rashid Rauf just slipped out of his handcuffs and overpowered the policemen who were escorting him back to jail after his court appearance on Saturday, or so we were told in a stream of breathless and speculative reports, as documented here over the weekend.

Rashid Rauf has been called "a key person" in the so-called "Liquid Bombers" plot, and alternately named as either "the mastermind", or "the messenger" connecting the plotters to al Qaeda leadership supposedly overseeing the alleged plot to down a dozen trans-Atlantic airliners more or less simultaneously. [Rashid Rauf is seen in this photo, taken after his court appearance December 5.]

Rashid Rauf's arrest in Pakistan in August of 2006 was the trigger for the arrest of 25 people in Britain on the 9th and 10th of the month. Ten of those arrested (including Rashid Rauf's brother, Tayib Rauf) were released without charge, but fifteen others still face charges, including "conspiracy to murder" for eleven of them. Their trial is slated to begin in the spring; Great Britain has been trying to extradite Rauf from Pakistan in connection with that trial.

The Pakistani charges against Rashid Rauf himself have been dropped -- twice. But they have been quietly reinstated both times.

The alleged plot -- if successful -- would have killed more people than 9/11, "a senior intelligence" source told The Observer, and Michael Chertoff, DHS-meister at the time, told CNN's Wolf Blitzer that the plot could have killed "hundreds of thousands of people".

The alleged plotters were supposedly planning to mix bombs from liquid explosives which they would have smuggled aboard the aircraft disguised as sports drinks. We're told they were planning to step into the washrooms with their bottles of Lucozade and emerge with bombs capable of knocking jumbo jets out of the sky.

From a chemical and logistical point of view, the plot (alleged or otherwise) was impossible, regardless of whether the plotters were intending to make TATP (as suggested by the Guardian), or HMTD (as suggested by the New York Times), or MEKP (as hinted on a few message boards). All of the reactions in question take much longer to complete than any terrorist would possibly be allowed to spend in the washroom aboard a flight, intercontinental or not, as we have documented here (and here, and especially here).

Thus we had flashing terror alerts and the virtual lockdown of Heathrow, with the cancellation of thousands of flights, and the airlines losing millions. And to this day we have much more restrictive airport security -- none of which makes us any safer than we were last August, when we were in absolutely no danger.

But it's not about explosives; it's about propaganda. And from a propaganda point of view, the alleged plot was -- and remains -- almost perfect, especially since the timeline is so shaggy, and the use of classified national security information for political purposes is so obvious, as documented P. O'Neill at the excellent Best of Both Worlds (starting here, then here, later here, and finally here).

It would have been completely perfect had it ended in a blaze of glory with Rashid Rauf's miraculous disappearance, in which he somehow opened his own handcuffs and overpowered his escorts to vanish inexplicably into the mist of Islamabad.

But instead we now have a detailed account of Rashid Rauf's escape, as told by Shakeel Anjum in Pakistan's The News, who has sources inside the team investigating the incident. Shakeel Anjum's story begins last week:

A warning letter was sent to the capital police by the superintendent [of the] district jail to tighten security of the high profile British national of Pakistani origin, as he was a hardened criminal, Adiala jail sources told The News.

The letter, dispatched in the second week of December, was addressed to SP [superintendent of police] (Headquarters) as well as a DSP [deputy superintendent] of the police headquarters responsible for deploying duties...

Sources said ... the authorities, taking it as a routine letter, marked it to the higher authorities without taking any measures to beef up Rauf’s security.

And so ... Rashid Rauf's police escort consisted of two policemen, Constables Wazirzada and Muhammad Tufail, who told the investigating team that they were traveling with Rashid Rauf, who was handcuffed, in a private taxi.

Great Britain has been asking for Rashid Rauf to be extradited, even though Pakistan has no extradition treaty with the UK.

Pakistan has requested a certain builder in exchange for Rashid Rauf, but the UK has apparently declined. Two Balochi nationalists were arrested in London last week in what appears to be an attempt to set up a counter-offer.

Rashid Rauf and his police escort had been in Islamabad for an extradition hearing on Saturday, and at about 3:00 in the afternoon, as they were going back to the jail, they passed a mosque (on Adiala Road, near Gulshan-e-Abad).

Rashid Rauf asked if he could go in and pray.

Constables Wazirzada and Tufail said he could.

He asked them to wait in the car.

About twenty minutes later, Muhammad Tufail went into the mosque to find that Rashid Rauf had slipped out the back door -- handcuffs and all!

The news took its sweet time finding its way up the chain of command, according to Shakeel Anjum, who quotes an officer inside the investigation as saying:

“The authorities took the transportation of the suspect so non-seriously that only two cops were deputed to move him and that too in a private cab instead of a police mobile van.”

“Apparently, Inspector (Hawalaat) is responsible for his escape because he is supposed to take the ... inmates from jail and send them back escorted by heavily guarded police vehicles.”

But this time everything was done differently:

“Reserve Inspector (RI) headquarters sent the ‘special team’ comprising two constables to fetch the high profile suspect from jail by a private car instead of police van and to take him back to jail in the same way.”

“The police high-ups were informed about his escape about two-and-a-half hours after the incident,” the officer said.

To cap off our story, The News reports that no "missing persons" bulletin was ever issued over the police wireless network.

So there you have it. It may be perfect after all.