Democracy In Action: Slain Leader's Crown Passes To Her Son 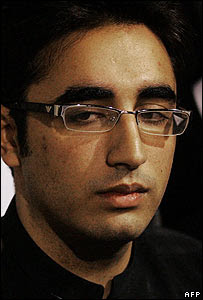 The PPP, Pakistan's largest opposition party, has democratically chosen to honor Benazir Bhutto's lifelong commitment to democracy by democratically treating the leadership of the party as an heirloom and handing it to her 19-year-old son, Bilawal Zardari, a handsome young man who lacks any political experience, but whose political future has been well-planned for a long time.

Bilawal will democratically assume the responsibilities of his position once he has finished his degree at Oxford. His education will include private tutelage in the labyrinths of Pakistani politics. Lucky Bilawal.

While he's being groomed, the party leadership will remain in the Bhutto family, democratically resting in the hands of his father, Asif Ali Zardari, Benazir Bhutto's widowed husband.

And to mark the democratic occasion, the new democratic leader-in-waiting has changed his name, adding his mother's (maiden) name, as Somini Sengupta reported in the New York Times:

The elder Mr. Zardari said his son would henceforth be known as Bilawal Bhutto Zardari.

Now, at least, nobody will ever forget who Bilawal's mother was. 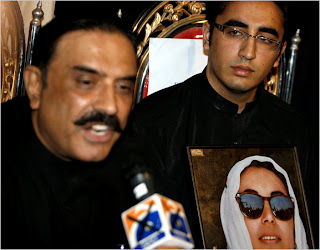 According to Somini Sengupta, the elder Mr. Zardari

instructed reporters not to ask his son any further questions, saying he was “of a tender age.”

Asif Ali Zardari is not a candidate for the upcoming Parliamentary elections, so he will not be eligible to become Prime Minister.

That honor would most likely fall to PPP vice president Makhdoom Amin Fahim, although "the elder Mr. Zardari" added that this decision "would have to be made by party leaders," according to Somini Sengupta.

All this is speculative of course, and assumes that the PPP will win the upcoming election. The poll, scheduled for January 8, may be delayed by several weeks because of the assassination and the violence that followed it, most of which now seems to have subsided.

PPP leadership have already declared their intention to run; this ruins any possibility of a boycott, such as the All Parties Democratic Movement was trying to organize. As Somini Sengupta puts it:

The other main opposition party, led by Nawaz Sharif, another former prime minister, also decided Sunday to call off his previously announced boycott of the vote.

So much for the APDM. Without a united opposition -- and with no boycott of what will certainly be a rigged election -- whatever happens next cannot be much more than crude street theater, to be performed with many of the provisions of Musharraf's November 3 declaration of emergency still in place, although officially the state of emergency is over.

In effect, by choosing to participate in such a shady game, the current PPP leadership continues Benazir Bhutto's path of legitimizing the military dictatorship which only last month declared a state of emergency in order to better fight the terrorists, then arrested hundreds of lawyers and judges and human rights activists, sacked the Supreme Court, shut down independent media, and so on ...

And no matter when the next election is held, it's only for Parliament, not President. Under normal circumstances the next President would be elected by the incoming Parliament, but Musharraf has already rigged the matter so that his next term in office is assured.

And unless I am very wrong, Bilawal can go back to his studies, and his father can go back to managing his Swiss bank accounts, and Musharraf can go back to making new laws declaring his abuses legal and permanent and beyond the reach of any court, because democracy in Pakistan is not to be restored.

It could never be restored because it never existed in the first place. At best it was a dream and a hope, and perhaps also a slightly possible outcome. But the potential is long gone, because the corporate- military- terrorist establishment has already taken over in Pakistan, where the PPP has just been decapitated. 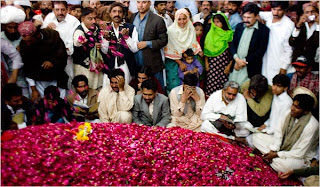 Meanwhile, the country continues to mourn the slain two-time Prime Minister, while more details continue to emerge indicating that Thursday's assassination was a state-sponsored hit, carefully planned and carefully covered up.

Athar Minallah, a board member of the hospital where Ms. Bhutto was treated, released her medical report along with an open letter showing that her doctors wanted to distance themselves from the government theory that Ms. Bhutto had died by hitting her head on a lever of her car’s sunroof during the attack.

In his letter, Mr. Minallah, who is also a prominent lawyer, said the doctors believed that an autopsy was needed to provide the answers to how she actually died. Their request for one last Thursday was denied by the local police chief.

This is from Jane Perlez in Lahore:

Pakistani and Western security experts said the government’s insistence that Ms. Bhutto, a former prime minister, was not killed by a bullet was intended to deflect attention from the lack of government security around her. On Sunday, Pakistani newspapers covered their front pages with photographs showing a man apparently pointing a gun at her from just yards away.

Her vehicle came under attack by a gunman and suicide bomber as she left a political rally in Rawalpindi, where the Pakistani Army keeps its headquarters, and where the powerful Inter-Services Intelligence agency has a strong presence.

The government’s explanation, that Ms. Bhutto died after hitting her head as she ducked from the gunfire or was tossed by the force of the suicide blast, has been greeted with disbelief by her supporters, ordinary Pakistanis and medical experts.

Apparently it's OK to write reports like this for the NYT if the crime was committed in Pakistan.

Mr. Minallah distributed the medical report with his open letter to the Pakistani news media and The New York Times. He said the doctor who wrote the report, Mohammad Mussadiq Khan, the principal professor of surgery at the Rawalpindi General Hospital, told him on the night of Ms. Bhutto’s death that she had died of a bullet wound.

Dr. Khan declined through Mr. Minallah to speak with a reporter on the grounds that he was an employee of a government hospital and was fearful of government reprisals if he did not support its version of events.

Coincidence theorists like to ask "How could they keep a conspiracy quiet?"

The medical report, prepared with six other doctors, does not specifically mention a bullet because the actual cause of the head wound was to be left to an autopsy, Mr. Minallah said. The doctors had stressed to him that “without an autopsy it is not at all possible to determine as to what had caused the injury,” he wrote.

But the chief of police in Rawalpindi, Saud Aziz, “did not agree” to the autopsy request by the doctors, Mr. Minallah said in his letter.

A former senior Pakistani police official, Wajahat Latif, who headed the Federal Investigative Agency in the early 1990s, said that in “any case of a suspected murder an autopsy is mandatory.” To waive an autopsy, Mr. Latif said, relatives were required to apply for permission.

In this case apparently they didn't do that; it was the chief of police who canceled the autopsy.

But then again the family didn't ask for the scene of the crime to be obliterated an hour later.

They didn't even ask for security to be pulled away from Benazir just as she left the rally in Rawalpindi.

Do you think these things just happen on their own?
File under: Asif Ali Zardari, Benazir Bhutto, Bilawal Bhutto Zardari, Jane Perlez, Pakistan
Email ThisBlogThis!Share to TwitterShare to FacebookShare to Pinterest
Posted by Winter Patriot