So The US Hired A Few Friends To Help Keep The Peace -- Wouldn't You? 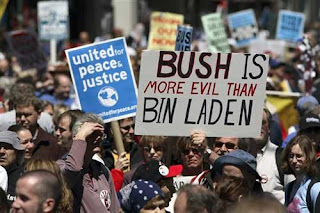 American politicians continually throw up their hands in disgust that Iraqis cannot reconcile or agree on how to share power. But equally destabilising is the presence of a large US army in Iraq and the uncertainty about what role the US will play in future. However much Iraqis may fight among themselves, a central political fact in Iraq remains the unpopularity of the US-led occupation outside Kurdistan. This has grown year by year since the fall of Saddam Hussein. A detailed opinion poll carried out by ABC News, BBC and NTV of Japan in August found that 57 per cent of Iraqis believe that attacks on US forces are acceptable.

Nothing is resolved in Iraq. Power is wholly fragmented. The Americans will discover, as the British learned to their cost in Basra, that they have few permanent allies in Iraq. It has become a land of warlords in which fragile ceasefires might last for months and might equally collapse tomorrow.

I thought I might expand on this a bit, talk about how it got this way. Ha! Just as I was getting started, I noticed that Chris Floyd had already taken the handoff from Cockburn and made good progress in an even better direction, combining a different excerpt from the same column with a venture into Peter Dale Scott's account of "9/11, JFK, and War: Recurring Patterns in America’s Deep Events" and a look back at one of his own best works, Ulster on the Euphrates: The Anglo-American Dirty War in Iraq. Samples follow.

The US military ... does not want to emphasise that many of the Sunni fighters now on the US payroll, who are misleadingly called “concerned citizens”, until recently belonged to al Qa’ida and have the blood of a great many Iraqi civilians and American soldiers on their hands.

In effect, the Americans have bought the barest modicum of temporary "stability" in Iraq by hiring al Qaeda. This is of course merely a renewal of a long-standing relationship between the various shifting entities grouped under the rubric "al Qaeda" and the forces of "deep politics" in the American power structure.

Recently I have written about Ali Mohamed, who was Washington’s star double agent inside al-Qaeda, and also a chief al-Qaeda trainer for aircraft hijackings.60 (Mohamed “knew at least three terrorist pilots personally,” and also “knew the internal procedures of the security company that maintained two checkpoints used by hijackers at Boston’s Logan airport.”)

Triple Cross, by Peter Lance, confirms that Ali Mohamed, one of al-Qaeda’s top trainers in terrorism and how to hijack airplanes, was an informant for the FBI, a one-time asset of the CIA, and for four years a member of the US Army. This special status explains why one of his protégés, El Sayyid Nosair, was able to commit the first al-Qaeda crime in America, back in 1990 [the assassination of the Jewish extremist Meir Kahane], be caught along with his co-conspirators, and yet be dismissed by the police and FBI as (and these are actual quotes) a “lone deranged gunman” who “acted alone.”

This is, of course, the very tip of many icebergs. And for the past several hours, rather than writing a post, I've been reading Cockburn, and Scott, and Floyd.

A guy could do a lot worse.

Patrick Cockburn: Only One Thing Unites Iraq: Hatred of the US

Ulster on the Euphrates: The Anglo-American Dirty War in Iraq

Peter Dale Scott: Exclusive excerpt: The Road to 9/11: Wealth, Empire, and the Future of America

Al Qaeda and the U.S. Establishment