What Took You So Long? Osama bin Laden Says The US Wants Iraq's Oil 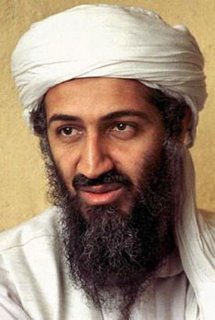 If Osama bin Laden claims the United States wants to exploit Iraq's oil, does that mean it's not true?

I'm just kidding about that; I suspect the real import of the story is that now those of us -- conspiracy theorists -- who have been saying the same thing all along can be branded as "terrorists".

That part was easy. My real question is more difficult: What's with Osama bin Laden?

He's supposed to be this great geopolitical genius, capable of drawing the USA into battle on his terms, and keeping us there against our will, and so on...

Do you mean to say it's taken him all these years to figure out America wants Iraq's oil?

He may be a terrorist mastermind, but he's no conspiracy theorist.

Oh well. I guess it makes as much sense as anything else about the GWOT.
File under: Iraq, oil, Osama bin Laden
Email ThisBlogThis!Share to TwitterShare to FacebookShare to Pinterest
Posted by Winter Patriot