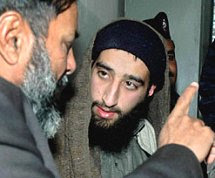 Pakistan's Interior Ministry has offered to extradite Rashid Rauf to the UK, according to a sketchy report from Lahore via The Post.

Rashid Rauf has been called "the mastermind", the al Qaeda connection, and "a key person" in the so-called "Liquid Bombers" story, an alleged plot allegedly foiled in London last August.

The alleged plotters were allegedly plotting to make bombs out of common household liquids while in flight and use those bombs to knockdown ten or twelve intercontinental airliners more or less simultaneously, killing "hundreds of thousands of people" as Michael Chertoff breathlessly informed us.

The alleged plot shut down Heathrow Airport in August of 2006 and led to airline travel restrictions which are still in effect, despite the simple chemical and logistical fact that the alleged plot was impossible.

Several explosive substances can in fact be made out of household liquids, but in each case the reaction takes several hours to complete, during which the reacting liquids must be kept cold. The idea that anyone could occupy the restroom of an airliner for several hours without being disturbed is beyond ludicrous. And even if it did happen, the resulting explosive compound must then be isolated and processed before it could be used as a plane-killer. Nobody could possibly do such a thing on one plane, let alone a dozen of them at the same time.

Nonetheless, twenty-five people were arrested in Britain, of whom eleven are now charged with "conspiracy to murder" and four are charged with less serious offenses. Their trial is supposed to begin the spring of 2008. The other ten, including Rashid Rauf's brother, Tayib Rauf, were released without charge.

Meanwhile, in Pakistan, the charges against Rashid Rauf have been dropped -- twice. The prosecution dropped the charges in December of 2006 only to have the government move quickly to have them reinstated. And last month -- in a surprise move that was said to pave the way for Rashid Rauf's extradition -- the charges were dropped again last month -- just after President Musharraf's declaration of emergency and his sacking of the courts.

The charges that were dropped in Pakistan concerned 29 bottles of hydrogen peroxide, which Rashid Rauf allegedly owned and which were somehow to have been involved in the alleged plot. And it's true that in the UK, the alleged plotters were allegedly plotting to use hydrogen peroxide in their doomed attempt to kill hundreds of thousands of people. But how was Rashid Rauf's peroxide in Pakistan going to be used against planes flying to the USA from Britain? Nobody wants to talk about that.

This is not the first trial balloon that's been floated regarding the possibility of Rashid Rauf's extradition. But Pakistan and the UK have no extradition treaty, so there's been some difficulty regarding arrangements.

Great Britain has not charged Rashid Rauf in connection with the alleged "Liquid Bombers" plot, and in seeking his extradition the British have concentrated on his potential connection with the 2002 murder of his uncle in Birmingham, after which Rashid Rauf fled Britain for Pakistan. The Brits appear to believe the Pakistanis will extradite more readily on a murder charge than for a terrorism-related offense...

For its part, Pakistan has offered Rashid Rauf for extradition previously, asking for eight alleged Balochi militants in exchange. Britain declined. Again there's a quid pro quo, says The Post: now Pakistan wants a builder who fled to the UK from Pakistan after the Margalla Tower collapsed in the earthquake of October 8, 2005. It is not yet known whether Britain will accept the offer.

If I were the British authorities, I'd say, "Sorry, old chap! We can't give you the builder. Ask for somebody else."

And I'd hope everyone would just forget about this case altogether.

twenty-fifth in a series