Good News! All Iraqis Agree On Something! 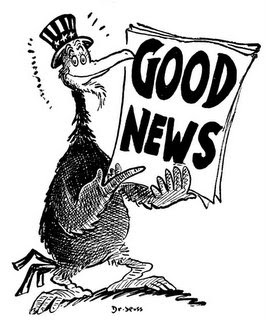 Iraqis of all sectarian and ethnic groups believe that the U.S. military invasion is the primary root of the violent differences among them, and see the departure of "occupying forces" as the key to national reconciliation, according to focus groups conducted for the U.S. military last month.

Why is this good?

[Military] analysts optimistically concluded [that] the findings indicate that Iraqis hold some "shared beliefs" that may eventually allow them to surmount the divisions that have led to a civil war.

Who cares if the civil war was started by the Americans?

Who cares if the Americans who started that civil war plan to stay almost forever?

The main thing is the Iraqis have something in common!

Even the bad news is good, if you know how to present it:

Bad news is often presented with a bright side, such as the focus-group results and a November poll, which found that 25 percent of Baghdad residents were satisfied with their local government and that 15 percent said they had enough fuel for heating and cooking.

The good news? Those numbers were higher than the figures of the previous month (18 percent and 9 percent, respectively).

Here's a bit more good news -- not too much; just enough to keep you happy for a little while:

According to a summary report of the focus-group findings obtained by The Washington Post, Iraqis have a number of "shared beliefs" about the current situation that cut across sectarian lines.
...

Dated December 2007, the report notes that "the Iraqi government has still made no significant progress toward its fundamental goal of national reconciliation." Asked to describe "the current situation in Iraq to a foreign visitor," some groups focused on positive aspects of the recent security improvements. But "most would describe the negative elements of life in Iraq beginning with the 'U.S. occupation' in March 2003," the report says.
...

Few mentioned Saddam Hussein as a cause of their problems, which the report described as an important finding implying that "the current strife in Iraq seems to have totally eclipsed any agonies or grievances many Iraqis would have incurred from the past regime, which lasted for nearly four decades -- as opposed to the current conflict, which has lasted for five years."

Overall, the report said that "these findings may be expected to conclude that national reconciliation is neither anticipated nor possible. In reality, this survey provides very strong evidence that the opposite is true."

But despite all this, the article concludes,

A sense of "optimistic possibility permeated all focus groups ... and far more commonalities than differences are found among these seemingly diverse groups of Iraqis."

So much spin ... Are we dizzy yet?
File under: Iraq, manure
Email ThisBlogThis!Share to TwitterShare to FacebookShare to Pinterest
Posted by Winter Patriot